In Solitude – Channeling the Ghost of Change 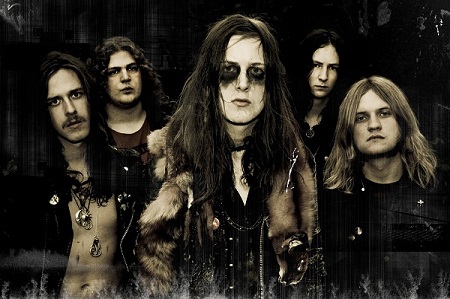 Anyone that wears a dead fox draped around their neck has some serious balls…or hasn’t been brow-beaten by PETA yet. While it’s not as imitable as King Diamond’s skull-and-bone microphone stand or Bruce Dickinson’s parachute pants, In Solitude’s Hornper should at least get some credit for spicing up metal’s tricky and rules-dominated dress code by wearing said deceased fox onstage. The poor thing even gets swung around from time to time. And animal rights activists thought Glen Benton was bad when he shot some pesky squirrels…

Running hot from last year’s well-received The World. The Flesh. The Devil, In Solitude have taken Mercyful Fate-inspired classic metal and brought it into the relatively new decade with exacting precision. Horpner’s hoot and holler recalls the King’s Melissa days (sans falsetto), while the band’s harmony-bred and lateral power/thrash mode is about as palpable as any of the current “retro” metal bands running amok at the present time. In essence, In Solitude are like a more amped-up and full-throttle version of Ghost, with both bands owing a tremendous debt to the aforementioned Mercyful Fate and King Diamond.

Set to hit the boards with the godly bill of Behemoth, Watain, and The Devil’s Blood in North America this April, we snagged Hornper for a quick round of questions to discuss where In Solitude has been and where they’re going. We didn’t ask about the fox, but such things don’t need further explanation sometimes…

Hornper: Like the number ensured, the eleventh year was a year of great destruction, confrontation and a greater understanding of why and where we are heading. Both when it comes to In Solitude and our personal lives. I don’t want to go in on details too much, but 2011 was a bath in fire on all levels of my life. From here on out goes a devil’s breathing…

Blistering.com: Did you foresee any of this success coming your way?

Hornper: We sensed that an internal process was at work that was different from anything before and that was going to change our lives and our band forever and make the album harm the way it does, which also is why the album itself sounds and feels the way it does. Any “success” in terms of selling albums or playing live wasn’t anything on our minds around the time of the album, no. And still isn’t. When you sense something turbulent coming your way, it’s usually quite hard to examine on which levels this will occur. And usually it slips into everything in life.

Blistering.com: You’re from Uppsala, Sweden, which is also the home of Watain and Invidious, two bands (like you) who share an affinity for satanic music. Is there something in the air that makes the three of you follow this path?

Hornper: This is something I’ve been thinking about a lot and I don’t really think I have an answer for your question. When we talk about this within the confines of our close friends, it feels at times that there is something about this place that plays an important role. This is something that we’ll probably have greater understanding of in the future. Besides us, Watain and Invidious, I really think Degial and Reveal should be mentioned here. One thing I can say, though, is that all of these bands are elaborating on ideas/visions and vocations in a way that is very unique to today’s standards, I would say. When it comes to the personal levels. I mean, going beyond the mere shallow masturbative activity of playing in a band, but actually penetrating the personal core motifs and what lies behind it all and what took us there.

Blistering.com: You’ve been slugging it out since 2002 with a handful of demos and EP’s to your name. Do you think because the band is so seasoned at this point, it will make you better prepared to make quality albums?

Hornper: Well, in all genuine artistry there’s an ever ongoing evolution at work. There are a lot of factors playing their parts in this. Especially if you initiate this process on such an early age as we did. I mean, In Solitude has been a present creative “waterhole” for us since we were kids, more or less. We’ve been growing up together within the confines of In Solitude. And I think the process of “becoming” really shines through in In Solitude. Vulnerable, naked and ready for what destroys us…

Blistering.com: Having Metal Blade in your corner has to be a big help. How did you hook up with them?

Hornper: We were looking for a label that would give us the possibility to focus fully on our music. So when we came in contact with them it felt like the right thing to do.

Blistering.com: Fred Estby [Dismember] manned the production duties for The World. The Flesh. The Devil. What was it like working with someone who has a death metal background?

Hornper: His studio experience in general was very important. Not just when it comes to death metal, but his overall understanding of capturing sound and atmosphere. We were on the same page to say the least. I look forward to working with him again in the future.

Blistering.com: Production-wise, the album sounds very natural and raw. Do you think it would have the same effect if it were a very clean and pristine production job?

Hornper: No. I mean, the album sounds the way it does because it was the production that the music needed. Any other way is hard to talk about now. I mean, it’s hard to put the contents in another place in retrospect.

Blistering.com: By your estimation, how does The World. The Flesh. The Devil. stack up next to your self-titled debut?

Hornper: To put it simple, I would say that the new album takes us deeper on all levels. It all has taken complete hold our whole lives and the emotive & spiritual motif that makes this band has driven us much further into that latent place which unravels us. It feels, if you ask me.

Blistering.com: There’s an obvious Mercyful Fate influence here, but you have taken it and added some new twists to it. Do you worry the band will have a hard time getting around those comparisons, or do you not care?

Hornper: Well, we have had to come to terms with the fact that this is mentioned almost everywhere. But I honestly think it has more to do with peoples need to gain a foothold in what they hear and see to not fall, which is what they and all of us be doing should in music – fall. They need a frame of reference in order to understand what’s going on. A need to hold on to something, sadly, when they should look straight forwards on what’s being evoked in them emotionally. But it does not surprise me. Dark, suggestive and dramatic black metal music like ours makes people think of things in the past that has moved in similar areas. I must add that there are other things that have had a much, much greater impact on our sound than Mercyful Fate.

Blistering.com: A bunch of songs really stick out here, but I’ll point to “To Her Darkness” as being my favorite. What about you?

Hornper: They’re all beautiful to me. And they have all wounded me greatly. Certain fragments and moments of songs – be it anything from a lyric-strophe to a few seconds of certain songs – have mirrored certain key things in special ways that was out of our control. But in overall, the whole album destroys my life.

Blistering.com: You have the North American tour with Behemoth and Watain coming up. What are your hopes/expectations for it?

Hornper: Already at this point, almost a month before it goes off, I sense a lot of turbulent inner currents coming my way. Which is what happens every time we’re about to go on tour. The live experiences take me to the outer landscapes of emotion. And this comes with great self-destruction and rebuilding. An elevation that it painful by necessity. So, all in all, the dance of death goes on and it’ll be beautiful.

Blistering.com: You’ve hit the States a few times thus far, so what is your take on it?

Hornper: This far I’ve found the American crowd to be very refreshing compared to most places. During our tour of the south together with Down I was struck by the honesty of the live situations, between the crowd and the band. A lot of people seemed to demand blood, sweat and tears from a rock group in order to be taken in their grip. This is a very good thing, and I hope that this tour brings out these people.

Blistering.com: Many are fawning over this tour, but for you, what is your dream tour?

Hornper: Anywhere where we are consumed by that which lurks beneath it all.

Hornper: As if standing on a shore with my finger in the edge of the water, the vibrations and waves tell me that it’ll be devastating.