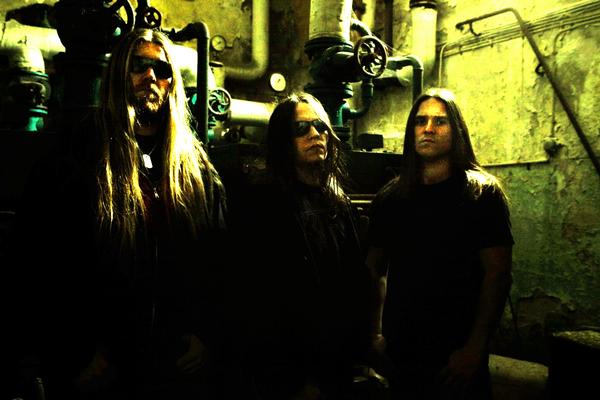 There’s not much ground Hypocrisy’s Peter Tägtgren hasn’t covered. The man has Hypocrisy (obviously) and its two-decade plus career. He has his commercially viable industrial project Pain, along with a truckload of producer credits to some of the underground’s most crucial albums. He also owns his own town in the countryside of Sweden. Let’s not forget that.

The topic at hand is Hypocrisy’s excellent new A Taste of Extreme Divinity, an album that was four years in the making. The band’s output this decade has been reliable, but not as world-beating as their run in the late 90’s which included the trifecta of Abducted, The Final Chapter, and Hypocrisy, yet A Taste… rivals some of those works. It’s the Hypocrisy album Tägtgren has been threatening to make for almost 10 years; the perfect blend of brutality and melody, along with those efficient, song-oriented numbers the band is known for.

We caught up with the effusive Tägtgren a few days prior to the launch of their now ill-fated North American tour with Ensiferum that was ultimately derailed due to paperwork issues. Here’s how it went…

Blistering.com: You usually turn around albums within a two-year span of each other. Why such the delay between Virus and the new one?

Peter Tägtgren: We were definitely burned out from touring a lot on the Virus album. We had shitty management that was really killing us mentally as well. I felt like I wanted to concentrate on Pain for awhile, Horgh [drums] was going back with Immortal, Michael [Hedlund, bass] became a dad, so it was a good time to take some time off.

Blistering.com: A Taste of Extreme Divinity sounds like a combination of everything Hypocrisy is good at. Is that a fair assumption?

Tägtgren: [pauses] For me, just writing…we don’t have to try to develop our style anymore like we did in the 90’s. I think we achieved that back then. Mainly for us, the most important thing for us is to write as good as songs as we possibly can.

Blistering.com: For you, what songs are sticking out? I’ll go with “Alive” and “Weed out the Week.”

Tägtgren: “Weed out the Weak” is pretty good; same with “Hang ‘Em High.” “Valley of the Damned” is something I should have given to Kerry King [laughs].

Blistering.com: So you’re back down to working as a trio. How is the working relationship between the three of you?

Tägtgren: We went back to do doing what we usually do. The only “off” thing that we did was with Virus and that had all of us collaborating as songwriters. All the other albums, I’ve been sitting by myself, writing songs, then sending to the others. I wrote nine songs for this and I sent them to Horgh so he had something to practice on. Same thing with Michael’s songs. He put them together, puts a drum machine on, took away the shit riffs. My songs, I’ve been writing since the Virus album and I kept on writing riffs and riffs and riffs, so it was good to have these three and a half years to throw away bad riffs… re-tool some of the songs. I think the album has more quality to it this time.

Blistering.com: Speaking of Horgh, what’s it like working with him? I know Lars [Skoze] was good, but Horgh is one of the more well-known drummers in extreme metal.

Tägtgren: He’s very organized. You can always count on him that he has everything under control. He practices a lot. For me, it’s very easy to work with Horgh because he’s so prepared…always. It doesn’t matter if we’re going on tour, he has everything [ready].

Tägtgren: No, it won’t be a problem at all. We work very close with each other – Immortal and Hypocrisy. Wherever who gets the gigs first, gets that place. We’re always double-checking with each other to make sure nothing gets fucked up.

Blistering.com: You just produced the Immortal album and for a period of time, you were pumping out albums. At this rate, are you comfortable with how many albums a year you produce?

Tägtgren: Nowadays…back in the beginning of 2000, I had enough of this shit because it became silly. At the end, you weren’t thinking or contributing with fresh ideas because you were overworked, really drained. I said “Fuck this, I’m going to slow down or otherwise I’m going to kill my name and it’s not going to be better production, it’s going to get worse and worse.” Also, I never had time – I had to book in Hypocrisy or Pain in the studio and put them on the schedule, otherwise I had no chance. The most important thing is to concentrate on Pain and Hypocrisy, then I can just sit in my peace and quiet and do whatever I want.

Blistering.com: Do you ever take a look at the current hot-shot producers like Andy Sneap or Jens Borgen? Do their production jobs impress you?

Tägtgren: I’m sure it sounds good. I don’t pay too much attention to what other people are doing. My goal is to push myself to do better and better all the time.