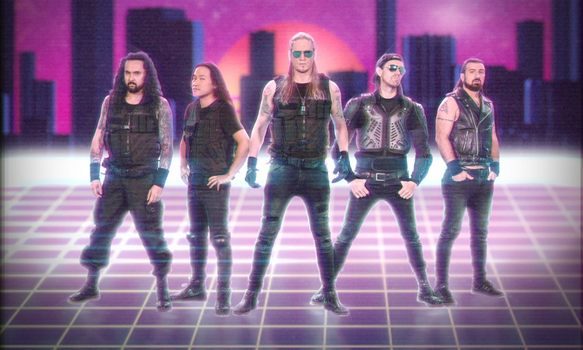 Dragonforce has always had a particular feeling to their music. There’s a fun factor to something like this, and some people get it and some don’t. But there’s no denying the technical prowess the band brings to the table, with frequent blistering speeds and frenetic guitar solos that elevate them above the usual power metal status. With their upcoming album, Extreme Power Metal, it seems they’ve really gone above and beyond in making something that screams Dragonforce. Its over-the-top and extreme, in the ways that the band has always had a knack for. We grabbed guitarist Herman Li for another round of Q&A to get the inside scoop on the new album, the future of guitar, and much more.

Herman Li: We felt like it was within the theme of everything – that over the top Dragonforce style. It’s all about fun and having a good time in metal. Everything that we like to do kind of went into this new album. Extreme Power Metal as a title is ridiculous and over the top enough for it.

Dead Rhetoric: Is it a challenge to one-up your approach with each album?

Li: Not really, we kind of just do what we feel like doing to be honest. Everyone knows that we are into this retro video-games and elements like that in the music and the artwork. This time we are doing a retro-future take on the late ‘80s done in our way. Mixed in with a more modern type of thing.

Dead Rhetoric: Did you feel that you were kind of just going all in this time with that theme – I’m looking at things like the promotions to the cover to the music videos?

Li: We wanted to thicken the theme of it. All of the ideas and the way that we are presenting the album, visually, is something we have wanted to do for a while. But we never had the time to do it, so this seemed like a good time. It’s been a lot of fun to do it that way – we aren’t the type of band to take ourselves too seriously, and that shows as well. If you don’t like it, you don’t like fun [laughs]!

Dead Rhetoric: Obviously the band is no stranger to covers – why “My Heart Will Go On?”

Li: [Laughs] It’s a good song, and it’s got that big chorus. Dragonforce songs are actually pretty similar to that anyway. We have the big chorus where you can put your fists in the air, and we have that epic feeling. We felt song would be a fun one to do. It’s typical for us – we butcher the song into Dragonforce-style music, so it doesn’t sound like the original. We never play any covers in the way they were played originally, that’s not really our thing.

Dead Rhetoric: It really does sound like one of your songs – if there is someone on the planet that hasn’t heard that song before, it’s hard to tell.

Li: Yeah – we put it as the last song though, so if you hate that song you can just turn it off. It’s a stupid thing though, because in the digital age if people don’t like a song they just take it off the playlist anyway. I even made put DDD on the CD – I haven’t seen a CD with that logo on it since the 1990s – that it was recorded and mastered digitally. So there are those kind of fun things on the album artwork as well.

Dead Rhetoric: With the idea that someone can just remove a song if they don’t like it, does that give you more confidence to just go for it and do what you want to do?

Li: That’s one thing, but we still have to make a track order that makes sense, for people who are going to listen to the album straight through and not skip anything. So the approach is still that the listener is actually going to give a shit and listen to all of the songs. At least in my mind, I think every Dragonforce song is a single. There’s not a song that you don’t feel is memorable – definitely not on this album.

Dead Rhetoric: Where’d the idea to record part of the album from your Twitch stream come from?

Li: There were a few reasons. I always see those ‘making of the album’ videos that come out to promote a new release. They cut videos up or pretend that they are playing. People say that Dragonforce can’t play their guitars – I don’t know what they are talking about. We have been touring around the world for years. So there was that. We also really wanted to have some fun with this album.

We recorded it onscreen, so people can also see the human side of us. We make mistakes, or we could make a killer solo right in front of people – anything could happen. It’s a fun thing to interact with people when you are recording. The recording studio is a really boring place. It’s really stressful. So we had the chat there, and we interacted with fans. They could see the 100th version of a solo on a song. It’s been a really cool thing.

Li: People go about it all the time – they say that every song sounds the same, or that a song sucks. We’ve got a platinum record – so if everything sounded the same, we should have like 50 platinum records. It’s so stupid. The Internet let’s people talk about absolute nonsense anyway. I haven’t really fallen into it, but if people want to have a laugh, I’m going to have one too. I’m going to play this music right on the [web] stream. You can come and talk shit – I’m right there. You can give it to me right now [laughs].

Dead Rhetoric: So do you feel that Twitch is a good way to communicate directly with fans?

Li: Yeah – I prefer the more live interaction than the posting of ‘hey, I did some amazing thing’ on Facebook. That sort of thing. The world is changing. But I prefer just talking to people right then and there. You can actually interact and talk about things. I don’t know of any other bands that have been doing it. Ones that will play live or sit down in the studio and do it. Creating something as we are rehearsing it.

Dead Rhetoric: Could you discuss having Stevie T join the band for the upcoming tour?

Li: We’ve got the greatest triangle player on the planet coming on tour with us. What is there not to like [laughs]? I guess you can hate him too, because he’s pretty out there with his videos – he will probably split the crowd pretty well. He fits in well with Dragonforce. We don’t care either, we split the crowd too. One thing for sure though, is that we will have a fun show and you can expect some crazy triangle and bass playing, along with guitars and all that. I can’t tell you too much but it will be fun.

Dead Rhetoric: You’ve mentioned this a few times already, but how important is the element of fun, in either listening to the music or in the live arena?

Li: I think the fun element is a self-expression of what we are. I like to have fun when I play on stage, and so does the rest of the band. People have different types of fun. Some people enjoy headbanging for an hour – that’s their kind of thing for sure. We have a different view on it with our music. I think this new album is a full-on artistic expression from the band, top to bottom.

Dead Rhetoric: So would you consider Extreme Power Metal your definitive release to date then?

Li: It’s just a snapshot of our lives really. I can’t say that this is better than the other albums. They are all different and have different approaches to them. But it has everything Dragonforce is about. The fun factor, the songs are catchy, and that over the top feeling. We call it extreme power metal, so it’s not just power metal that you are seeing from the European bands. Some people feel we play too fast or our solos are too long. They are, if you just want to go for the basic structure that is being done. There are bands that still take things to another level, in different ways.

We believe that we take it in our extreme way. And by extreme, we aren’t growling. We are extremely catchy, or extremely fun to watch [laughs]. You can put it in many different ways. Extreme doesn’t mean it has to be brutal or have blast beats. We have blast beats but we do it in a melodic way. I think people have gotten used to metal being screaming and shouting, and you have to have a circle pit or that’s it.

Dead Rhetoric: In the PR you had a quote about the music being accessible and focusing on tour – what’s your approach to the changing music industry?

Li: You don’t really know if you are playing catch up or on the cutting edge. What sites or approaches trend digitally – if you are in or out. Facebook was really big. I don’t know many people that use it anymore, unless you are old. Young fans don’t use Facebook. I don’t see younger people posting on Facebook about their dinner – they are doing something else. And the platforms are running their own rules. You are giving them the power of controlling your data.

You can have a million followers and they tell you that you can’t reach them and just put the hammer down. So I guess as the tech guy myself, and as a computer nerd before Dragonforce became professional, I am saying that we try to keep on top of things nowadays. We gave it a break for a while, but we are back on track with the social media stuff and understand what we are dealing with.

Dead Rhetoric: What do you see as the future of guitar if you were to look ahead?

Li: A lot of great players on YouTube and the internet, because there are so many resources for people to learn from. But the one thing you can’t learn is how to play live, unless you experience it. Opportunities are getting smaller and smaller for people to play live. We will see what will happen. I think live is still an important thing, though some people feel how many followers you have is more important.

But the tech companies limit how many people you reach. A lot of these guys on the Internet are complaining about their money being cut on YouTube and things like that. When you go out live, you are in control of the situation. Not in the same way as online, where you have to cut through the data. Hopefully I think people will take care of that part, so that they can really show their true talents and great guitar playing, and not just be limited by followers online.

Dead Rhetoric: What’s next for Dragonforce – I know you have a tour coming up pretty quick?

Li: There’s the tour of course, and we are going to release more music videos. I am planning to make a music video for each song, because why not? We aren’t just having someone get videos for us, we are involved so it’s more fun. By the time the album is released, we’ll have at least three music videos out.