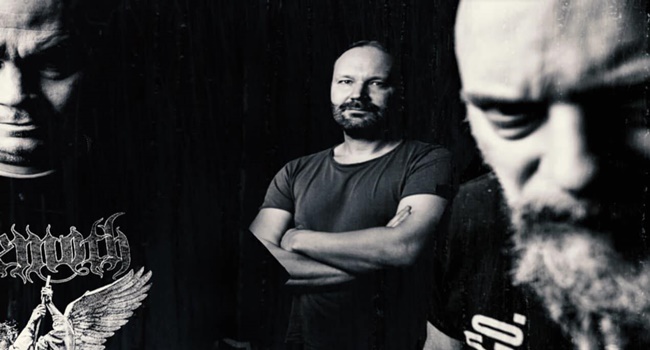 Originally active during the 1990’s and early 2000s, Defleshed produced a series of demos and albums combining a vicious attack of death/thrash that spoke to the intensity and purity of those genres. Although released on various independent labels, many times these companies wouldn’t be able to push the music far, or would go bankrupt over the years, leaving the band very frustrated in their struggle to attain a bigger footprint within the scene. Returning after a seventeen-year absence from the studio, Grind Over Matter continues the band’s penchant for primal, relentless material that takes no prisoners – now with the added push of Metal Blade on their side. We reached out to vocalist/bassist Gustaf Jorde to take us into the reasons behind reuniting the band, the new album, thoughts on the changing metal landscape, his time with Evocation, plus what’s on the horizon for the group.

Dead Rhetoric: Grind Over Matter is the sixth studio album for Defleshed – and your first since resurrecting the band. You originally recorded a couple of songs for a vinyl box set that never came to be – which led to recording a new album. Why did it feel right to reform and make Defleshed active again after dissolving in 2005?

Gustaf Jorde: The initial thought was exactly as you said, make the two new songs for as a bonus seven-inch single to support the box set, surprise everyone with a newly produced single. But that never happened, we still liked the outcome of the new songs better than we thought from the beginning. The writing was a little bit more fun. If we got a decent offer from a decent label, should we aim for a full-length? We all agreed on that, and Metal Blade came back to us with a good offer. If we wouldn’t have gotten an offer from a label of that magnitude, we wouldn’t have gone on with the album.

This is one of the reasons why we folded back in 2005. We never got any backup whatsoever from our old labels. We were sick and tired of that situation, us always putting maximum in every release and nobody does anything with it. This time around, it has to be a good offer from a good label, and we got it. There was nothing to think about.

Dead Rhetoric: So, you feel good being on Metal Blade, a world-renowned label, versus what you’ve dealt with in the past?

Jorde: There is a big difference. They have totally different distribution channels, along with this interview situation, they have an established network that pushes us in ways that were only within our dreams back in the day. So far, we are really happy with that solution, yes.

Dead Rhetoric: How did the songwriting and recording sessions go for this album? Where do you see this record sitting in the catalog of Defleshed albums, and do you believe your additional time away allows the trio to gain more of a critical ear as to what works best for the band?

Jorde: We had actually, one week ago, we received the last bits of our back catalog, they are now back with us now. Everything belongs with us, all the papers with the dissolution of the old contracts are signed. And that’s great for us to move ahead with the back catalog because as it has been throughout our career, our discography has been scattered throughout a lot of different labels, and it does nothing but sit with the rights. We wanted to sort this out with this reunion, we had to sort our past out.

We approached the songwriting for this new album the way we have always done. The only thing we wanted to avoid was to make the same album with the same songs over again. The tricky thing was to make it sound like Defleshed, but we needed to add new flavors to it. We didn’t want to develop Reclaim the Beat, part two, you know? We still it wanted to sound fresh and inspired. Lars stars with doing the riffs and the songs like he used to, and it comes down to me and Matte, we lay down our layers and the songs turn out to be Defleshed, so to speak. It was the same modus operandi like we had back in the day.

Dead Rhetoric: When it comes to the lyrics, did you have a different approach being away for so long from Defleshed as well?

Jorde: I didn’t want to write the same lyrics over and over again. This time, I couldn’t really- the lyrics are on the new album are based on the fact of the paradox of mankind is the most intelligent species, yet we drive the entire world to shit. That kind of paradox was the baseline for everything on this album lyrically. Before that I used to do non-lyrics so to speak, driving very fast a car into a wall, I couldn’t do that this time around. When I had this other topic in mind, it was easy to write these songs with personal inspiration. That was how it came about this time. I’m rather picky to when it comes to the lyrics – I need things to rhyme now, get off from the tongue, and keen on the titles to be interesting and intriguing as well. It’s kind of a puzzle with the lyrics every time.

The time period to write the lyrics was pretty short too, as I was handed the material around Christmas of last year, and by the 24th of January we were heading into the studio. It had to be fast production in that end.

Dead Rhetoric: You mention in the bio sheet that the hardest part working on this record is to not get too carried away by impulsive ideas too much – staying put to the original plan. Is this where the additional support / ears of Lawrence Mackrory come into play with his recording expertise – keeping the group focused and sharp?

Jorde: Yes, one of his duties for sure. At least when it comes to me, I can easily get carried away and want to try stuff that might not always hold relevance. But in general, I’d say we have a pretty clear plan when entering the studio song-wise. The main role he plays is getting the best sound possible for the songs and to set the foot down when we’re off the path.

Dead Rhetoric: What made Metal Blade the ideal label to sign with at this juncture in the band’s career? Do you believe they have the proper understanding, knowledge, and expertise that aligns well with the band as far as goals, marketing, promotion, etc.?

Jorde: We needed a strong professional label if we were going to release an album at all. I think we wouldn’t have been interested in releasing something for a minor label of the same capacity as before because we know how it turns out. Its utterly frustration being in a band and having the back catalogue on three different small labels that has gone bankrupt or folded, resulting in your music being unavailable or sold to a third party beyond your control. All those things led up to us losing interest back in 2005.

Today we have the full rights to our back catalogue and secured the new music on a relevant label, so we are in a better position to move forward from here. When it comes to marketing and promotion, we have full confidence in Metal Blade. They’ve proved that their concept is functioning over time, and that’s enough for us to not doubt their intuition and know-hows.

Dead Rhetoric: What would you consider some of the special memories or accomplishments during the career of Defleshed – specific albums, tours, festival appearances, or other events where you knew you were making a mark with your craft?

Jorde: Hard to be specific there, I believe the sum of all efforts and experiences adds up to where we are as a band today. But some of the main milestones for us have been the Cannibal Corpse tour ’99, Japan tour, the Sweden Rock performance from 2005 and a couple of other happenings.

Dead Rhetoric: How was your time during the 2010’s within Evocation – what did you think of that band and your years there?

Jorde: I really love Evocation and that was a big reason why I joined them. Both musically but also the band as individuals. I was really sad to see them split, I thought they had so much going for them. The last album The Shadow Archetype is still a go to album of mine.

Dead Rhetoric: Knowing that this is more of a part-time endeavor, do you believe the members overall feel less stress and more joy about taking things forward on a case-by-case basis? Have the goals shifted as a result compared to the first go around for Defleshed?

Jorde: Yes, we are pretty unstressed when it come the future of the band this time around. I mean we are still motivated, maybe more than ever, but we don’t have high hopes and a career-focus per se. We take things as they come, and we all have our areas of expertise so the job for the band is pretty smooth.

Our goals today consist of making music we personally enjoy and having a good time making it. And as a bonus we’d enjoy taking our music some places we haven’t before.

Dead Rhetoric: How do you feel about the changes in the scene given your many decades as a musician – where would you like to see things develop in the metal scene for the greater health and stability of the bands, venues, fans, labels, and other parties involved?

Jorde: I think metal has evolved in a good way. The sub-genres have melted together to the extent that people are less focused on them which is great. In the 90s everything had to be so true which impaired the evolution of the music I’d say. Today you can mix black metal with dub step if you wish and that wouldn’t be frowned upon.

And all the venues, labels, zines – the ones that still exist have proven to be the best and most serious which increased the level of professionalism. So, from that perspective I’d say the scene is better that ever.

What I do miss is the music that is made for no other reason than making good music. I feel many bands are more motivated by making a career than making original and interesting music.

Dead Rhetoric: What’s on the schedule for activities related to Defleshed over the next year or two? Does the band feel enough energy and inspiration for another studio album down the line?

Jorde: I think we have yet another interesting album within us. The motivation and hunger for doing this is as high as ever so that won’t be the showstopper this time around. But we must see how the album lands out there before making plans for our next steps. It remains to be seen if we’re endorsed by doing more music at all. But from our end there are some ideas we’d like to move on with. I even got a bunch of titles I’d like to work with.

Other than that, we’ll do select shows and perhaps mini tours if offers interesting enough appear. We take things as they come, we have no masterplan really other than musically rip fucking flesh off faces.