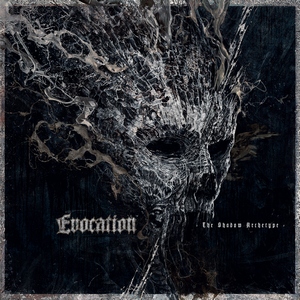 Always a bit of an underdog in the scene, Evocation got their start in the Swedish death metal business as it was starting to get hot, only to vanish after two demos in the early ‘90s. Much like a number of acts from said time period, they inevitably rose back up again in the ‘00s with added strength and experience, and with a legitimate tie to the origins of the genre.

The words Swedish death metal may make some run to the hills at this point, but Evocation’s long-standing ties with the genre give them the added boost needed to keep them established within it. Of course, it’s not enough to make them last for over 10 years after re-surfacing either. So what gives Evocation an edge is their approach to songwriting – they don’t rely upon the same old, same old to get the job done. Sure, you’ll hear the distinctive buzzsaw crunch in the guitars, which plays a bigger role in some songs like the assaulting and groovy “Imperium Fall,” but the feel of the music avoids the retro feel. Instead, timeless comes across as a stronger adjective, with slower and methodical cuts like “Dark Day Sunrise” and galloping melodeath thrash of “Modus Operandi” giving the band a solid check mark in the diversity column. There’s even a mellow acoustic piece (“Blind Obedience”) and short, gloomy intro piece (“Into Ruins”) that actually works in establishing a mood. As could be expected, melodies integrate into each song, be it in the leadwork in the title track, or the catchy groove of “Sulphur and Blood,” and will find a way to stick with you after the song ends.

Evocation continue to refine their approach on The Shadow Archetype, with sleek melodies and a diverse songwriting approach that separates them from the pack (not to mention the sound production values). Classic sounding death metal done well, and full of enthusiasm. With the right combination, it’s all you need in a release such as this.