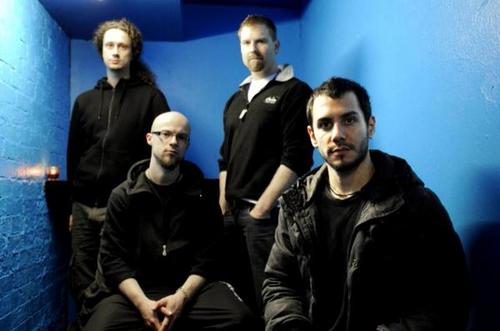 For all the spins this scribe has given Traced in Air, the one resounding thought is how different the world is from 15 years ago. Discounting things on a personal level (I was in the 5th grade – that’s right), the metal underground is a drastically different place. There were no ‘zines like Blistering, no message boards for the “scene police” to espouse their verbal diarrhea upon, no zillion sound-a-like bands (although the death metal copycat boom was just about to happen), and no available record company at every turn. All of this makes one wonder how Cynic would have fared had they more resources and a stronger underground base. We might not of had to endure 15 years between albums.

Then again, there was never supposed to be an album #2 for Cynic. Around 1994, the band had grown disinterested in the progressive death metal sound they helped usher in with the groundbreaking Focus and morphed into the far more mellow Portal. Instead of following up Focus, the band did the wise thing and put Cynic on ice, for what seemed to be forever. The good looking corpse of Focus was supposed to be Cynic’s only contribution to the metal world, but as singer/guitarist Paul Masvidal tells us, the universe had its own plans for Cynic.

Late October of 2008 will see Cynic (rounded out by drummer Sean Reinert, bassist/chapman stick Sean Malone, and new guitarist Tymon Kruidenier) return with Traced in Air. An album that has succeeded all expectations, Traced in Aircan proudly stand beside Focus in the prog death annals and is even more melodic and ethereal than its predecessor. The weary strands of death metal are hardly evident, replaced by a malleable, supremely melodic atmosphere that allows for songs like “King of Those Who Know,” “Adam’s Murmur,” and the haunting “Nunc Stans” to take almost a futuristic, supernatural form.

The soft-spoken and cerebral Masvidal phoned Blistering to discuss the reformation and a variety of topics, including his tenure in the Florida death metal scene, his short-lived stint in Death with childhood friend Chuck Schuldiner, and plans for the future, which at this juncture, seem to be a reality.

Blistering.com: Fifteen years removed from Focus, what stoked the fires to get back in and do a new album?

Paul Masvidal: It started with the 2007 reunion tour which happened as the result of a bunch of synchronicities. It started with a dream from a Russian fan where he went to a festival and Cynic played and it was really cool. Then after that email, there was a series of events that brought Cynic back into my life and there were probably seven total in the course of two weeks that were just…one of those if I was willing to pay attention – which I was – the universe was saying, “You need to get back together.” It was the combination of more phone calls, emails; just Sean (Reinert) and I had the same dream, and then Kelly (Shaffer) from Atheist calls and tells me I have to do this.

We had really closed the door on Cynic and never intended to open it again, then all of sudden it appeared dramatically in a concentrated period of my life and I just responded to it. I called Sean and at one point and said, “We got to do this” and that was the beginning of the reunion process. We didn’t intend to make a record. We just thought we’d get out there and share Focus with people again and that generation that didn’t get to see us back in the day. We got back from the tour, and had “Evolutionary Sleeper” that we played just as an experiment. It was a song I had that felt very Cynic-like to me and the response was really incredible, almost on the verge of overwhelming. I got home from the tour, sat down and looked at my stuff and developed ideas and started developing some stuff. I got Sean in here, jammed, worked out ideas and we knew, after a couple of rehearsals, that we had something to say, our return was purposeful.

Blistering.com: Are any of these songs left over from the period in 1994 when you were trying to do the follow-up to Focus?

Masvidal: Everything is brand new. I’d say 10% of the album is the stuff from my library, just miscellaneous ideas I developed further. The post-Focus period for us is Portal. We recorded 10 songs that were where we were going, which was not Cynic at all. It was a whole different sound and we brought in a female vocalist and got really mellow without any distortion. That was where we were in ’94. We wouldn’t be able to make this record back then. We were in a completely different place. Curiously, it seems for us to have taken this long just makes sense. This is the record we were supposed to make as an album #2 because there really wasn’t a second album in the mid-90’s for us.

Blistering.com: While on the subject of Focus, are you surprised as to how well it has held up over the years?

Masvidal: It was surprising, completely out of left-field. Focus was a record we poured our hearts and souls into, gave it everything we got, and then let go of it. Fifteen years later people are calling it this influential and groundbreaking album, but for us, it was just a record we gave everything we had. I don’t think it’s possible to calculate, you know, making a classic. You can’t do that as an artist. You do your best and trust your instincts.

Blistering.com: Any temptation to go back to Morrisound Studios and play it safe? It appears that in the end, Warren Riker (Down) was the right guy for the job.

Masvidal: Morrisound wasn’t even a thought in our minds. We’ve been living in California for 12 years; Sean’s been here for 11 or 10. We’re elsewhere now, we’ve moved on. Warren mixed the AeonSpoke (Masvidal’s side project) album and that’s how met him and we just stayed in touch. He’s one of these amazingly talented engineers where I can show him a painting of the notes of the artwork and tell him this is the vibe of the tune, and he gets it. Sean and I produced the record, so Warren was brought in as an engineer, but he’s so gifted. He’s really got a great sonic-sense. We’re really happy to have made a record with him. It was a lot of fun.