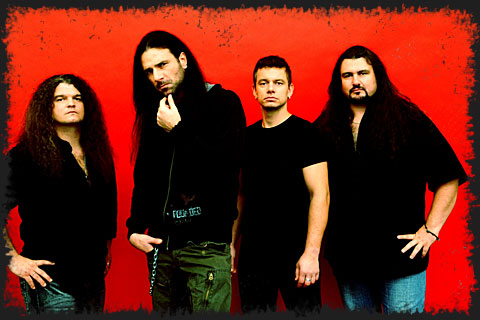 Brainstorm, the ‘other’ band of singer

Andy B. Franck (also of Symphorce fame) return with Downburst, the follow-up to 2005’s marvelous Liquid Monster. For Brainstorm, Downburst continues the band’s tradition of churning out dependable, modern slabs of modern power metal. Led by Franck’s burly, husky vocals, the bulk of Downburst is edgy, almost thrashy to a degree, especially “Fire Walk With Me” and “Stained with Sin.”

One of the things that has made Brainstorm so successful is their penchant for accessible, groove-oriented power metal numbers that often bridge the gap between the Euro pomp of their contemporaries and the American style

of modern metal so many in Europe favor.

The new year should bring forth change for Franck, with Symphorce taking a much-needed break after their Come Death album. Franck, ever the personable, go-getter is ready and willing to take Brainstorm to the next level, as evidenced by the first week of success of Downburst in Europe, where the album placed high on several charts. ’08 will see Franck and his crew on the road, with quite the back catalog to play live as well.

Franck phoned in on a cold Thursday afternoon to wax on his hectic schedule, the new Brainstorm album, and if he really is one of the hardest working men in German metal.

Blistering.com: Seems like you’re always busy, on the go. How do you manage both Symphorce and Brainstorm?

Andy B. Franck: Seems like that, huh? 2007 was a relaxing year, although I was mostly busy with Symphorce. With Brainstorm, the only thing we had going on was the DVD

and writing for the new album, but I think this year will be the most busy in terms of touring and working.

(laughs). When I’m taking care of things for Symphorce, I always have to look at the schedule for Brainstorm and make sure it’s ok to go out and do whatever I have to do. 2008 will only be Brainstorm, there will be nothing going on with Symphorce this year, though.

Blistering.com: The Liquid Monster did quite well for Brainstorm, raising your profile both in the states and overseas. Looking back, how do you feel about that album?

Franck: The “Almost Words” video is what did it for us in Germany and in other places in Europe. That’s the cool thing about videos – you can now watch them on the Internet in addition to the regular metal video shows. Even Myspace, people now know who Brainstorm is through that and we earn fans from new places. But to be honest, we had a long discussion before we started writing for Downburst and it stemmed from a listening session I had with Liquid Monster. I realized that we weren’t too far away from copying ourselves and that album itself wasn’t a big step, so that’s why we decided to come down and take a break, so that is why it took so long to do Downburst.

Blistering.com: You just lost your bass player, Andreas. Was there any inkling he was going to leave?

Franck: We knew for about two years that he was going to leave. His situation at home

and with his job made it so – he just didn’t have the time to play shows as much. This happens to everyone sooner or later – a band member has to make a decision about his personal life and the band. What will he do? Focusing on your family and doing the band is a stressful job, but both sides knew a decision had to be made and it took a lot of pressure off of him.

The DVD release was his going away present. We included the history of the band and told him he’d be featured in the storyline, so it was a nice going away present for him. The last show for him was at the Bang Your Head festival

, which is real close to his hometown, so that was nice.