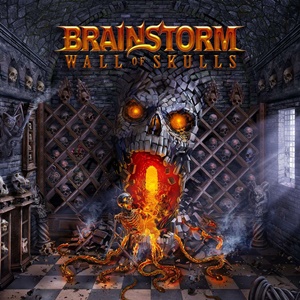 Fixtures in the German metal scene for decades, Brainstorm have a large discography that has made the quintet reliable on the recording and touring/festival circuit. Hitting their 13th album for Wall of Skulls, they return to Greenman Studios with Seeb Levermann (Orden Ogan) confident that with age and experience comes the wisdom to release powerful material chock full of energy, dynamics, and memorable hooks, melodies, and harmonies. Immediately taken aback with the vibrant snakes, skeletons, and skulls (the latter appearing in almost a vintage wine cellar-like montage) for the Gyula Havancsak cover art, expectations are high that the final product lives up to the initial package.

Following an obligatory atmospheric “Chamber Thirteen” opening intro, the battering ram cavalcade of mid-tempo to slightly faster power riffs, double kick speed, and high to the heavens Andy B. Franck melodies make “Where Ravens Fly” a proper standout – ensuring plenty of aggressive headbanging as well as unison audience singing during the chorus. Organ embellishment enhances the anthem-oriented chord progressions from guitarists Torsten Ihlenfeld and Milan Loncaric who provide ample circular main parts while building out the arrangement for “Solitude” – mixing up some cultural runs during another second half pleaser “My Dystopia”. The European finesse and progressive meets catchy tendencies come up in different ways – bassist Antonio Ieva contributing brilliantly during specific verses to allow Andy to shine in his lower/mid-range registers for “End of My Innocence”. Two special German metal voices grace the album too – Peavy of Rage appearing on “Escape the Silence”, another solid power/thrash offering, while producer Seeb adds his character and charm to “Turn Off the Light”. Tightly executing the performances and arrangements, it’s as if Brainstorm dug deeper into the key signatures of their sound and put them under a microscope for the best songs, leaving all excess behind.

Many ardent followers of Brainstorm probably have their favorites in the catalog (for this scribe, Soul Temptation and Liquid Monster) – and in the later years, you can’t go wrong with Midnight Ghost or Wall of Skulls for amazing power metal with thrash and traditional aspects at the helm. Rare is the day that an older band hits another creative stride quite like this – and we the listeners will enjoy this ride.