Saturday, 8th May 2021 By Katarina McGinn 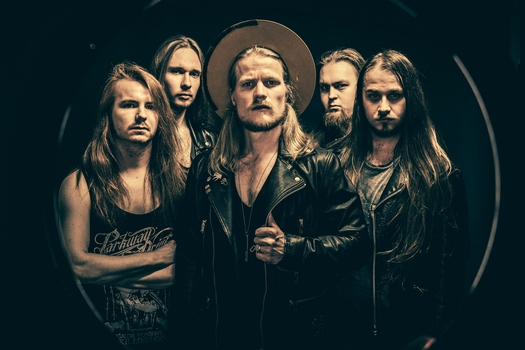 Over the course of the last decade, Arion has evolved from a power metal act to a more modern one. Their latest album, Vultures Die Alone, really augments these changes and crafts a musical experience that is instantly catchy and hook-based, but with riffs and rhythms that give it a heavy and satisfying appeal. Each track is all but guaranteed to sink into your brain and take up residence for a while. With that energy pouring through us, we decided to grab guitarist Iivo Kaipainen for a quick round of questions on Skype. We discuss the new album, evolution of the band, duets, and more.

Dead Rhetoric: What are you most proud of with Vultures Die Alone?

Iivo Kaipainen: I’m really proud that it is pretty far from the original sound we used to have when we released our first two albums, which were more power metal. I’m not saying power metal is bad, but this album sounds much more modern and different compared to those albums. It’s a sign of the band evolving. That’s one of the things I’m really proud of with Vultures Die Alone. Also, it’s a pretty versatile album. Even if it is versatile, it’s also very straight-forward. It’s not experimental in a bad way [laughs]. I’m also really proud of the guitars and vocals too. They were really well recorded, and I’m happy for that.

Dead Rhetoric: Do you feel that you have a lot of freedom in writing as you don’t stick to particular metal conventions?

Kaipainen: Yeah, it does. That’s kind of the key for the happiness that comes along with it. If your are doing more generic power metal, which again isn’t a bad thing, but it gets harder to write album after album. I think stepping into a new territory is easier to keep yourself inspired. We still keep the symphonic elements in the music, but the addition of the heavy riffs is really inspiring. That’s what this is about – evolving and going towards things that you feel you want to do.

Dead Rhetoric: “At the Break of Dawn” was my introduction to the band due to Elize [Ryd] from Amaranthe being involved. Do you feel that track really helped get your name out there?

Kaipainen: It definitely helped. You are not the only person who had that first interaction to Arion, so it definitely helped us. It wasn’t just because Elize was in it, but because everything in that song and release seemed to go really well. There was a lot of hype building for the release and it was really positive. Spotify played it a lot and many people seemed to like it. So they went into our other material and experienced a bit more. It was a huge start for us. That was when things were seriously kicking off for us. For the first album, we didn’t get much of an international response. It was positive, but that song was suddenly everywhere. Even people who didn’t recognize the name Arion still recognized the song.

Kaipainen: That’s another thing that is really inspiring. It was really obvious on this album that we would do a duet. When it comes to “Bloodline,” it was the first song I wrote for the album. It was actually quite difficult to finish at the start. When I realized I could turn it into a duet, it was much easier to finish. I realized it would be a great duet song. “In the Name of Love” was a bit different it that it was meant to be a duet from the start. I put a lot of emphasis on working on it in a way that two vocalists could work on it. I’m pretty happy with both duets, they are very solid songs. Duets in general are a part of Arion that will stick with us. We will continue doing them.

Dead Rhetoric: So is there any vocalists that you’d love a shot at doing a song with?

Kaipainen: That’s a funny thing. We had been asked to us in the past when we talked to Sweden Rock about the Life is Beautiful album. I replied that I would love to have Jake E (Cyhra/ex-Amaranthe) on a song. He actually replied to that interview later and said that he would love to sing on an Arion song. It was really awesome. We wanted to do it for this album but it didn’t happen, but it could happen for the next album. It will definitely happen at some point because he’s such a nice guy and a great singer. He’s one of the best live singers I’ve ever heard. So that’s one idea. I don’t want to call out any other names, but I have a few other ideas [laughs].

Dead Rhetoric: What’s important when it comes to providing hooks in material like this?

Kaipainen: For me, it’s the fundamental part of songwriting. The chorus melody and the vocal melodies in general are the main thing for me when it comes to songwriting, even though I’m a guitar player. For example, my riffs comes at later riffs when it comes to my songs. It usually starts with a melody. I work around that melody to give it a little compliment and support here and there. Like certain hits or rhythms. That’s how I approach songwriting in general. In Arion there is a huge emphasis on those vocal hooks. Its very intuitive, but it’s also kind of like structuring. I have certain techniques and I’m analyzing those melodies and riffs. I work well that way when it comes to melodies.

Dead Rhetoric: How do you feel things have changed for Arion over the last decade?

Kaipainen: Obviously things have changed quite a bit because we were like 16/17 when we started. Now we are in our 20s and we are slightly different people. I really feel like the group dynamics in our band are very strong and solid. We have certain roles in our band that everyone does, and it’s been that way for a while. That’s something that is really important. Of course, the musical style – we wanted to be a power metal band when we started, but nowadays we borrow a lot from American and British heavy metal – those heavy riffs and sounds, and straightforwardness, as well as the vocals.

Dead Rhetoric: What’s next for Arion this year?

Kaipainen: It’s quite difficult right now to plan really far ahead with the pandemic. But we are kind of looking at 2022 gig-wise. We are kind of looking to our American debut. It was supposed to be at Power Prog last year, but then it got cancelled and it is postponed until 2022. There is a European tour coming that is almost booked coming next year. The very next things were are trying to do is staying connected to the fans with things on Instagram and Facebook. Today I started experimenting with new material and starting to write new stuff. The album response just came and that helped to start the process. We are just kind of waiting for gigs to start. 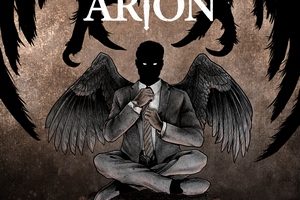