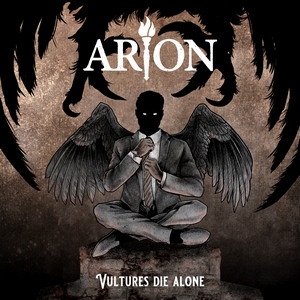 Arion made a big splash initially with this scribe with their single “At the Break of Dawn” (which featured Amaranthe vocalist Elize Ryd). Upbeat and potent modern metal that had massive hooks and melodies, and just enough power metal bravado. Second album (and first for AFM) Life is Not Beautiful was a solid entry but lacked a certain something to make it truly special. Three years later with follow-up Vultures Die Alone, Arion has not only fixed any kinks but have taken things to a whole new level.

The songs on Vultures Die Alone simply burst out of the speakers with energy. That’s the best way to describe the listening experience. The melodic metal backbone has strengthened, and each of the songs has an even greater sense of confidence and power. There’s an near-perfect mix of urgent heaviness and graceful/epic melodies to balance things out, and some songs will really impress on first listen. “I Love to Be Your Enemy” has a triumphant sounding chorus, but it doesn’t simply rely on it to hold the band up – instead some thrashy energy is poured out through the verses, with a helping of cinematic vibes that pulls the track into an all-around winner. Opener “Out of My Life” similarly sets the tone for the album with upbeat riffing and swirling melodies building up into a soaring chorus that modern metal fans are going to really dig. Some guest appearances sprinkle added flavors with Noora Louhima on the frantic “Bloodline” and Cyan Kicks on the more melodic and gentle “In the Name of Love” both work well and put a different spin on the music. That said, the band can display a more melodic side, and closer “Until Enternity Ends” is an elegant ballad that wraps things up on a more peaceful note – yet still urges you to give the whole thing another listen.

Vultures Die Alone is an utterly addictive piece of melodic metal. The combination of immediate hooks that embed themselves into your skull and long-lasting melodies and raging energy is just what one would hope for in this particular genre. Arion have truly left their mark with this third release, and many who didn’t have them on their radar are bound to be changing their tune quite soon.