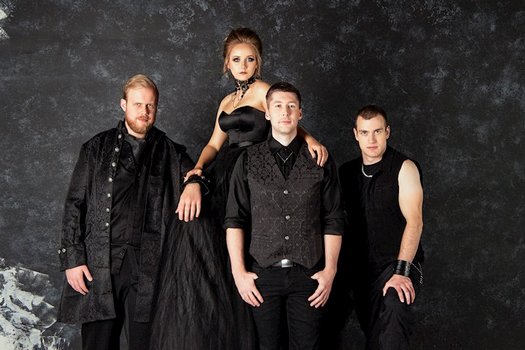 New acts pop out of the woodwork each and every day, but it’s rare to find an act that immediately finds it’s own sound and embraces that direction.  Age of Athena are a new act that manages to combine the immediacy of metalcore with that of more European-influenced symphonic metal (among other things, no less).  It’s an exciting sound that shows its roots, but isn’t afraid to twist them into different directions.  We chatted with guitarist Zachary Sabean about the album, the band’s musical direction, future goals, the Toronto scene, and more!

Dead Rhetoric: On Metal Archives I saw that the band was listed as being formed in 2016.  Could you go into what went into the band in that time before this first EP?

Zachary Sabean: Myself and the keyboard player, Nathan [Gross], we met at university.  We were a few years separated, but we met through some mutual friends.  In London, Ontario, there’s a small little metal scene.  It’s the same people that go to all of the shows.  That’s how we met and started writing music together.  Then next year, through Kijiji, the ad site, we met our vocalist Helen [Illumina], and Michael [Johnson] our drummer.  Since then we were jamming and writing songs, and slowly coming up with the material to put out for an album.

Dead Rhetoric: So do you feel that having that time at the start allowed you to get a better grasp of what the band was?  There’s a lot of bands out there that just get together and fire something off and hope it works.  To me, this seems more involved than that.

Sabean: We have been sitting on some of these songs for a while.  Because of the pandemic, we had finished the recordings but we decided to hold off since we had a few other things to finish.  There’s no pressure as a brand new band to throw stuff out.  We didn’t need to rush things, we took our time and built it up right and here we are.

Dead Rhetoric: Gate to Oblivion is your first release.  What do you hope a listener takes from it?

Sabean: I hope that people will listen to it and just enjoy themselves.  Have a good time with it.  Whether they headbang, or if they enjoy the instrumentals – if there are guitar players out there, I know they are going to enjoy a lot of things I’m doing.  The drummer does some crazy stuff too.  If you want the lyrics and vocals, Helen has some meaningful stuff there too.  Just enjoy the album and have fun with it.

Dead Rhetoric: With the album being out for a few weeks, how has the response been to it?

Sabean: We have been pleased.  People have been listening to it, and people have been telling us they like it.  We have even sold a few copies.  Basically, we are just a small, nobody band at this point and it’s our first album out there.  Other than friends and family, who else is going to check it out in the beginning?  So it’s really cool that we are sending out cds to not just the US, but France and Portugal too.  It’s exciting and not a feeling I expected to have at the start.

Dead Rhetoric: Has Bandcamp been a means that international people could order the album?

Sabean: We have Bandcamp and a link on our website.  There are Spotify listeners too, and you can see where they are listening to it from as well.

Dead Rhetoric: You have a lyric video for “Dance with the Devil,” do you feel that song is the most representative of the band as a first impression?

Sabean: Yes and no.  Not a lot of songs have screaming in it, maybe a quarter of them.  But this one has screaming in it, and it also has great melodic singing, a minute long guitar/keyboard dual shredding, so it has everything the band has to offer in one song. That’s why we chose it.  Plus it has a lot of energy and it’s pretty catchy too.

Dead Rhetoric: With the varied influences that the band brings, what’s important about the way that you write songs in order to make sure it is cohesive?

Sabean: When we sat down and wrote each song, and I know you mentioned it in your review – was that it felt diverse.  We were very cautious of that when writing.  We wanted each song to feel different from the last.  Did we want a more upbeat metalcore feel like on “Dance with the Devil,” or did we want something more relaxed like in “Ephemeral.”  We wanted each one to feel different while tapping into all of the different things that we know and love as a band.

Dead Rhetoric: A major gripe I tend to have with some symphonic metal is how long-winded it can be.  Do you feel that the metalcore riffing elements give it a more direct feel?

Sabean: Yeah.  I’m the big metalcore guy in the group, whereas Nathan is more the symphonic guy.  So a lot of the songs that are more metal-driven, which is most of the album, has the drums and guitars in a more American, mainstream writing style.  Then Nathan adds the lush orchestrations and all he has to offer on top of that.

Dead Rhetoric: I do like the fact that the metal is on top.  You put that in and add the orchestrations later, and I feel like that keeps it more intact.  It keeps it from being too over-the-top with the symphonic piece.

Sabean: I think when you call us symphonic metalcore, people think more about Nightwish or Epica, but we are more American.  We just borrow elements from them.

Dead Rhetoric: Hmmm, symphonic metalcore…the first thing that comes to mind for me is a band like Bleeding Through.

Sabean: Every band these days comes up with their own subgenre.  So symphonic metalcore is what we are going with.

Dead Rhetoric: Could you discuss the cover art a bit.  There’s a lot of detail there.

Sabean: The cover art is awesome, we are quite happy with it.  We searched the internet and looked at a few artists we liked.  Pierre-Alain is from France, so we messaged him what his thoughts would be on how to approach the artwork.  We just wanted a giant gate, a sun, and angels…stuff like that.  The first thing he sent back was a rough draft of what you see now.  It’s awesome!  The gate is super detailed with the arms and bodies sticking out, the sun is burning, we all really like it.

Dead Rhetoric: Who do you feel would be good touring partners for Age of Athena?

Sabean: We will support anybody any day.  I guess since we have the symphonic-y stuff, a lot of metalcore acts might not be suitable.  I think a symphonic female fronted band would be good.  We’d love to support Epica.  The Agonist and Spiritbox would be good too, and they are both from Canada.  Lacuna Coil and Within Temptation would be good too!

Dead Rhetoric: What are some goals for band, either in the short or long-term?

Sabean: For starters, like the rest of the world, we would like to go and support live music and perform it ourselves.  The world is opening up slowly but surely.  That’s the immediate, to play shows here with our friends in Toronto.  We also have a music video that we are planning to release in about a month or two.   From there, just continuing the upward climb that every band does.  Just hustle and grind.

Dead Rhetoric: Montreal is really well established with a metal scene.  What can you say about Toronto in comparison to that?

Sabean: There are a lot of metal bands in Toronto and in the greater Toronto area.  We have a lot of friends in other bands.  There’s always support for shows.  We also have a lot of notable people in Toronto who are on YouTube.  We have Laura Babic and Nik Noctural.  Toronto has a pretty decent scene, like Montreal.

Dead Rhetoric: So what are your plans for the year at this point?

Sabean: The plans are to start playing shows once we can, release a new video, maybe start working on new music and maybe make a new single in 2022.  We will see where things take us from there, as well as developing our network – getting to know our fanbase and making new friends. 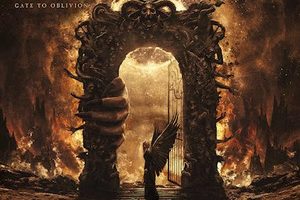