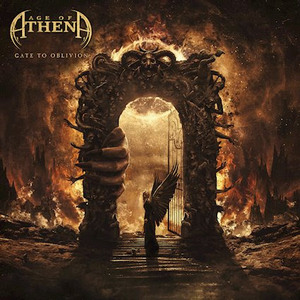 Finding a new act that doesn’t stick to the script is always worth a look.  In the case of Age of Athena, there’s much more to the band than a simply genre description could offer.  The band’s debut, Gate to Oblivion, does an excellent job of including influences from across a number of metal realms.  Something that makes the band one to keep your eye on as they move forward into the future.

There’s bits of melodic death metal, metalcore, power metal, and more extreme influences to take in with your first trip through Gate to Oblivion.  Fiery solos, catchy riffs, triumphant choruses, and some pleasant intensity give each track a bit of personality.  From the thrashy yet laced with guitar heroics of a song like “Dance with the Devil” to a more gentle and melodic touch that borders on symphonic metal (if not for the buzzing guitars) in follow-up song “Ephemeral,” this relatively new act has done an impressive job at packing in diversity while still keeping to a particular soundscape.  Each song, be it more of a rager or melodic cut, emphasizes some catchy moments that will stick with you – both from the dazzling guitar work and Helen Illumina’s potent vocal performance.  The pick of the litter (currently at least) is “Burn with the Sun,” the album’s longest song at just over 6-minutes, but it includes a tantalizing guitar-led opening that almost makes you think it’s going to be a high-flying instrumental until the vocals kick in and the track moves into some solid grooves before returning to the triumphant riffing atop the soaring chorus.  The track even includes a small acoustic section and spoken words to add to the grandiose nature of the song.  Yes, near the end of the album there is a ballad (“All for Nothing”), but given Illumina’s compelling voice it’s much more of a treat than a melancholic trope.

Seeking some fresh sounding metal from a new act?  Age of Athena casts a bright light at the end of 2021 with Gate to Oblivion that is bound to turn some ears their way.  Catchy, flashy, aggressive, and gentle all balanced by some excellent songwriting.