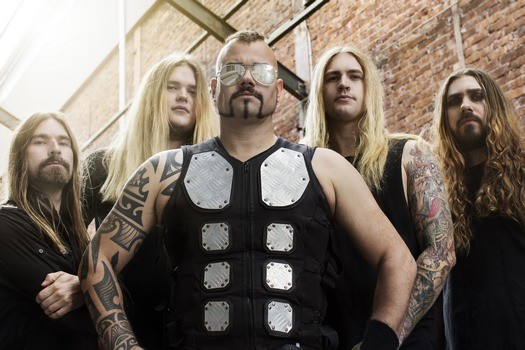 Coming down off the almost 12 hours of music the day before at the New England Metal and Hardcore Festival (which, yes, included all three acts in this tour package in slightly smaller doses), it was time to get right back out there again for a gig in Clifton Park, NY. Arriving more than 2 hours before doors, the first thing that impressed was the number of people in line already, eagerly awaiting their night of metal. Truthfully, though I don’t get upstate as much as I used to, I don’t remember the last time I’d seen so many people in line for a metal show at said venue before doors finally opened up. Based on that alone (well, and seeing the bands the night before), it was definitely going to be a show to remember.

With no local slots, the first to hit the stage was that of Battle Beast. After witnessing the frenzied shouts for the band the day prior (unfortunately they would play a 3-song set at NEMF), it did seem as if Clifton Park anticipated them just as much as Worcester did – which bodes well for the act on their first US run. Even better though, was their set itself. Battle Beast are an exciting and fun act to take in and they brought energy in spades. Lots of interaction between members as well as the crowd (who were easily won over) marked their set, as did the focus on their recently released (and totally excellent) Bringer of Pain. Everything from dancing (“Touch in the Night”) to straight rocking (“Straight to the Heart”) to power metal glory (“Beyond the Burning Skies”) was hit during their short, but oh so sweet, set. Hard to sit still and watch a band of this style – at the very least a smile should form on even the most hardened metalheads with “Beyond the Buring Sky.” Expect this band to be on many US folks radar by the end of this tour.

Next up was Leaves’ Eyes, who quickly returned to the States following their run with Sonata Arctica last fall (also hitting Upstate Concert Hall on said tour). The band’s consistent and compelling energy on stage makes them an excellent fit with the other two acts, with vocalist Elina Siirala and Alexander Krull taking centerstage in focusing the crowd’s energy throughout. Always with a smile, Krull almost constantly incites the audience to shout, clap, and raise their fists to the symphonic Viking sounds of the band (even donning a Viking outfit to close the performance), furthering what should be an easy sell considering the live-ready feel of the band’s set. An ever so slightly longer timeslot than last time, the band again stuck to newer material but it’s a strong selection of cuts that offer some variety. Again, the word fun comes to mind, from the folky “Swords in Rock” to the triumphant “Fires in the North,” it’s a rousing and addictive vibe. With any luck, the band’s work of building a larger US presence in the last year will pay off with a full headline set once their next album releases in early 2018.

Lots of chanting and shouting “Sa-ba-ton” started just about as soon as Leaves’ Eyes got off the stage, with a fully primed crowd ready to devour anything Sabaton was to deliver. Deliver they did, with plenty of charisma and presence throughout their entire extended set. A number of live staples from new and old filled the venue, with “Night Witches,” “Sparta,” “Ghost Division,” “The Art of War,” and “Carolus Rex” among the chosen. But a headline set it would not be without a few treats, and the band has been subbing some different songs in (NEMF saw the inclusion of “Soldier of Three Armies” for instance). Tonight “Got mit uns” (sung in Swedish) and “Attero Dominatus” found their way in, both being well-received by the crowd.

Outside of the setlist itself, Sabaton works best because of their stage energy. Joakim Brodén commands the frontman position, rallying the crowd and always interacts in a fun (and often funny) way. This time the “flag man” (from the 2014 Amon Amarth gig) was back and Brodén reminisced about said experience, as well as some jokes sprinkled throughout (including playing some Deep Purple on guitar). A pleasant surprise to see a lack of “encore” per say – the band slugged through the entire set and didn’t leave until they were done. After so many support gigs in the last few years, there were high expectations for a headlining run and the band really brought out a powerful performance worthy of the growing hype. All in all, you couldn’t ask for a better line-up from beginning to end. Easily one of the most exciting and flat-out entertaining tours of this spring season. – Kyle McGinn

Previous obligations precluded my ability to see Sabaton as headliners at the New England Metal and Hardcore Festival this same weekend (and predicted from their performance in 2014). Here we are three years later, and the long touring schedule that includes multiple North American appearances per album cycle pays off, as this is their first headlining jaunt here in support of their latest studio album The Last Stand. Rabid and tenacious not only as artists, but attracting similar feedback and energy from their fanbase consistently – probably one of the strongest reasons they’ve drawn well around the globe.

Making the two-hour trek on a glorious Sunday afternoon, a lengthy line formed outside Upstate Concert Hall an hour or so before doors. Patronage at the merch table appeared steady from the start – multiple options on the shirt, hoodie, and physical product fronts for all three acts. Sharply hitting the stage at 8 pm, it was clear that Battle Beast is already a crowd favorite even if this is their first North American tour run in their career. Delivering a potent brand of power metal with 80’s style-keyboards and groove, the Finnish act concentrated on their latest album Bringer of Pain for most of their half-hour set as “Familiar Hell”, “Bastard Son of Odin”, and “Straight to the Heart” captivated the sizable hordes from the front to the back. Noora Louhimo feels at home singing, clapping, and cajoling the masses, even encouraging some ‘metal dancing’ for “Touch in the Night”. Winning over people can be tough in an era of instant technology and limitless options, but for my money, this sextet impressed more than enough onlookers to be worthy contenders of ascending ranks with a few more stateside tour excursions.

Leaves’ Eyes hit the stage after a lightning quick 10-minute changeover – warming up the crowd with Viking themed symphonic metal. After witnessing an off-date headlining show last November, only getting 35-minutes could seem disappointing – but the band deliver on all fronts. Magnetic stage presence from Alexander Krull and Elina Siirala carries them vocally, while musically they can shift from the folk-ish “Swords of Rock” to power metal-oriented “Sacred Vow” in a heartbeat, beyond airing more traditional fare like opener “Halvdan the Black” and “Fires in the North”. Another checkmark to proving diversity works wonders in tour packaging, and already hard at work on their next studio full-length as they bring the show to the people.

As the crowd chanted their name numerous times during the break between bands, you could tell anticipation was through the roof for Sabaton. Their last appearance at this same venue in 2014 on the Amon Amarth tour proved a special one (see previous concert review for the reasons why), and this one would be equally special. A full 90-minutes of material: including songs rarely or never aired in America before like “Attero Dominatus” and “Union (Slopes of St. Benedict)”. Latest guitarist Tommy Johansson slots in as if he’s been with the group for a decade – even taking a hand at some of the vocals for “Gott mit uns”. Joakim Brodén even acknowledged the special ‘flag’ man who came to the show again, walking off stage to thank him during the conclusion of set closer “To Hell and Back”.

We danced, we clapped, we sang, we screamed- many others took the chance to crowd surf and even break into a pit frenzy to the songs of military war and history from around the globe. This scribe never tires of hearing “Ghost Division”, “Primo Victoria”, and “Carolus Rex” – beyond serving up a substantial airing of newer songs such as “Sparta”, “Blood of Bannockburn”, “Shiroyama” and “Winged Hussars”. Sabaton shows become events not to be missed – proving ample value for effort. The community is growing, giving hope that multi-generational appeal isn’t far away from cementing their legitimacy. Well done, Sabaton. – Matt Coe