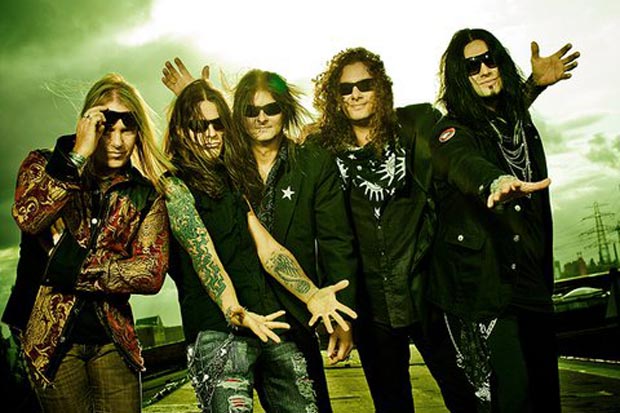 Helloween makes a North American trek about once every five years, preferring to play a string of select dates as opposed to the standard 4-6 week run. It’s a move done with consideration to costs and venue size, for by all accounts, the ‘Weenies don’t seem too keen on playing smaller clubs at this stage in their career. The allure was too much to resist for this scribe, for he and his doting fiancée made the three-hour trip from Pittsburgh, along the way celebrating a rare Cleveland Browns victory (via radio) with a surplus of snacks, King Diamond, and Katatonia. An optimal driving experience, no doubt.

If there is a letdown regarding the tour, it’s that Gamma Ray opted to not come along for this portion of the “Hellish Rock” jaunt. According to Helloween guitarist Michael Weikath (interview forthcoming), Kai Hansen and crew needed to devote time to wrapping up their new album, but will hook up with the tour once it hits South America. Therefore, a slew of local acts, along with reformed New York thrash mashers Coldsteel filled the opening slots. Coldsteel were afforded 30 minutes to test their 80’s thrash against an audience who no doubt had little idea who they were. Relying upon their new American Idle EP, the band displayed a competent brand of power/thrash, with lead singer Troy Norr doing his best to get the punters down front excited.

Touring in support of their new Straight out of Hell effort, Helloween has the eternal dilemma of having to plug a new album while satiating those who want to hear cuts from the Keeper albums. To the band’s credit, they did an excellent job of paying homage to the past with “Eagle Fly Free” and “I’m Alive,” while giving Straight out of Hell the necessary operating room, with “Nabeatea,” “Waiting for the Thunder,” “Live Now!” and “Hold Me In Your Arms” getting some love, and translating quite nicely, too, with ample bounce in the chorus selections, especially on “Waiting for the Thunder.”

In spite of the muddled sound (Newport Music Hall has been around since the 70s), the ‘Weenies personify what a fun and carefree live act should be. From synchronized stage moves, to Andi Deris’s constant smiling, to the regular punting of the band’s guitar picks among the members, it’s easy to get down when cuts like “Power” and “Hell Was Made in Heaven” get going.  Weikath and fellow guitarist Sascha Gerstner often met mid-stage to trade solos and goofy looks (especially from Weikath), while Deris could be found hanging by the drum riser hamming it up with drummer Dani Loble and bassist Markus Grosskopf. The usual array of encores hit via “Are You Metal?” “Dr. Stein,” “Future World,” and “I Want Out,” supplying the proper cap to a tight 90-minute set that never dipped in energy, or quality.  In all, just rewarding stuff all the way around, especially for those (like DR) who has waited a rather significant amount of time to see Germany’s premier power metal export.

A post-show email to this scribe from Weikath asked, “Was the son happy, finally?” Yes, Weike. Happy happy Helloween.