In the currently crowded field of melodic death metal, more often than not, if there isn’t something unique to a band’s sound, they are destined to be left to relative obscurity.  Thankfully for Whispered, their particular brand of Finnish-styled melodic death metal takes cues from the symphonic as well as utilizes a number of traditional Japanese instruments to carve their own little niche of samurai-inspired metal.

Shogunate Macabre is Whispered’s second release and is sure to appeal to fans of fellow Finns Children of Bodom, Kalmah, and Ensiferum, as well as newer USA upstarts Starkill.  A notable improvement over their debut in all areas, Whispered play synth-ridden, melodic death metal with heavy leanings towards shredding riffage and power metal-friendly virtuosity.  The tempo has a tendency to go for that upbeat, epic vibe and does well to keep everything flowing throughout the 45-minute album, even with ten-minute closer “Upon My Honor” (which features an elaborate solo that highlights the disc).

While it’s easy for some to view Whispered as just pulling off a more eastern-flavored Ensiferum, it serves only as a disservice to the band.  The Japanese instruments aren’t mere gimmickry, and add a feeling of authenticity that gives them an edge.  With the seemingly standout track, “Kappa,” the folk instruments add plenty of atmosphere to ride out the end of the track in an engaging fashion, but it’s the use of a saxophone solo midway through the song that steals the show.  Some of the riffs follow suit, with the opening of “Lady of the Wind” being a fine example of how the guitars can lean on the Eastern influences as well.

While Whispered have not quite made their mark yet, Shogunate Macabre makes the case that it shouldn’t be much longer until they do.  An album that is made to toss your fists in the air repeatedly, it does an excellent job of balancing full-on melodic death metal aggression with Eastern elegance. 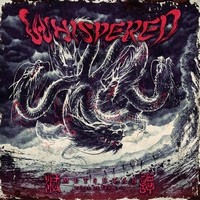