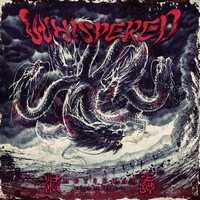 While some may balk at the term “Samurai metal,” Whispered have gone out of their way to show that they are a force to be reckoned with. Their last release, Shogunate Macabre, really saw them raise the bar from their previous material with an inspired blend of folk and melodic death metal. So it always begins the question: once you have established a sound that is uniquely yours, how do you proceed in the future?

In the case of Whispered, Metsutan ramps up the scope and intensity of the previous album to bring the band into even greater heights. The eastern folk elements are just as strong here, as “Chi No Odori” quickly introduces, but “Strike!” gives the first taste of how they successfully combine those elements with a playful and shredding approach to melodic death metal. The folk elements add some additional flavor and bounce off of the riffs nicely, giving Whispered more depth to their sound than other bands of their ilk. The melodic riffs and lead work also gives them a sharpened edge of their own too, as they play into the Eastern motifs while sticking to a more aggressive format.

Where the band has really made some progress though is in regards to their lengthy and epic tracks. With three songs that reach above the 7-minute mark, they give the best showcase as to what the band can do with their samurai sound. Beginning with some slower riffing and traditional folk sounds, “Sakura Omen” then takes off into blazing melodeath territory. The track veers between these thrashier sections and some grand melodies that bring things into “epic” sounding territory. 11-minute closer “Bloodred Shores of Enoshima” features strong synth introduction and then a variety of excellent leads, chanting, breakneck riffs, and Asian flair to make it quite the compelling closer.

An immediate ear-catcher, Metsutan doesn’t lose any of its strength over repeated listens. It effectively blends an authentic Asian influence to the folk metal structure while still appealing to those that like their melodic death metal full of frantic speed and flashy leads. Certain to break Whispered into the next level of awareness.