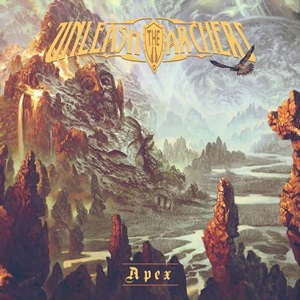 Journalists seek diamonds wherever they can find them – especially in a bountiful metal market place where weekly product hits the streets. Cultivating a healthy underground fanbase since 2007, Vancouver’s Unleash the Archers stride valiantly into their established power metal template with their fourth studio album Apex. Considering the universal acceptance of the last album Time Stands Still plus subsequent touring forays in North America, Europe, China, and Japan, permanent headlining ascension appears eminent. The band’s first full-on conceptual record (taking sci-fi/fantasy laden themes borne from the love of both genres by vocalist Brittney Slayes), the listener will partake in ten songs and an hour-long odyssey that proves metal’s long-lasting principles of honor, power, aggression, emotional connectivity, and strength through dynamic diversity.

Going to Jacob Hansen of Hansen Studios in Denmark bolstered the heavier sheen and forcefulness of many selections – giving “Cleanse the Bloodlines” and opener “Awakening” darker shades to expand ideas upon, the guitars slicing and dicing about the arrangements while the rhythm section bobs and weaves between full-on propulsion and solid metal mechanics. Uplifting choruses and twin axe harmonics allow “Shadow Guide” and “The Coward’s Way” to become likely favored anthems a la “Test Your Metal” from the previous record, the latter featuring nifty bass-oriented flashes from Nikko Whitworth that enhance the hook factor of the main riffs and supporting vocal efforts. Extreme screams and speed picking elements prove Unleash the Archers feel comfort in pushing the envelope, never adverse to taking their affinity for traditional and power metal to a modern audience that can handle more punch.

Wisely spreading out the epic seven-eight minute arrangements at the front, middle, and ending of the running time, these numbers stretch the instrumental capabilities as well as showcasing all facets of Brittney’s multi-octave abilities – lower to higher registers and the grey, prism nature in between. One listen to “False Walls” with it’s flashy, arpeggio-laced lead break against a Nevermore-ish texture and the moody roller coaster for the final title cut that features everything from acoustic touches to tribal drumming and a prolonged instrumental section that 80’s Maiden maniacs will rave about tells you Unleash the Archers are going for broke and leaving no stone unturned for the cause. Apex has broad base appeal because it’s catchy while being true to its ideals – transporting the listener on a journey not soon forgotten. Unleash the Archers deserve all the accolades and praise bestowed upon them, the future of heavy metal shining bright with their work in everyone’s collections.