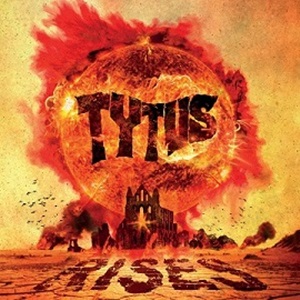 Rising in 2014 from the ashes of outside punk ‘n’ roll/hardcore bands to release a debut White Lines seven inch, Italian act Tytus shifted members and arrive at the debut full-length juncture for Rises. Embracing a 70’s hard rock to NWOBHM stance not only on the music front but also from a stage name standpoint (look to IIija Riffmeister on vocals/guitar as one of the best newcomers in that regard) – it’s a glorious time to put your creative stamp on a timeless genre given the healthy uptick interest in the roots of heavy metal.

Spider web oriented licks stack against each other while twin guitar harmonies echo throughout these ten tracks – the rhythm section keeping the tempos lean, mean, and swinging along like it’s 1981 all over again. A time when Iron Maiden burst onto the scene, Judas Priest would refine their anthems for a North American market ready for the taking, and a little known underground thrash band Metallica started writing material based on their affinities for a faster NWOBHM sound. Check out the strained, shouted choruses for “Haunted”, doom-oriented Mercyful Fate meets Black Sabbath licks that build to explosive, heads down riff hooks you hum for days in “Inland View” – as well as the large twin Thin Lizzy-guitar cultural moments from Riffmeister and fellow axe man Mark Simon Hell that make “Desperate Hopes” a sure-fire headbanger home run.

IIija’s rough and tumble delivery has enough strain to get the words across, but he knows his limitations as a singer and doesn’t try to ascend to high banshee terrain – it’s more of a sneering imitation of Hetfield gone headlong into say Peavy of Rage. This keeps material like “Land of the New Frontier” and rhythmic “Omnia Sunt Communia” within a down to earth comfort zone, easy for fans to pick up on to join in the metal celebration. While the influence references seem simple to identify, Tytus adhere to creative tact when establishing their own ideas – making these songs addictive and instantaneous. The total package from production and tones to blazing cover art and logo tells a true story – if the aforementioned artists described above align to your collection, along with relative newcomers such as White Wizzard and Sumerlands, Tytus deserves more than a cursory glance. 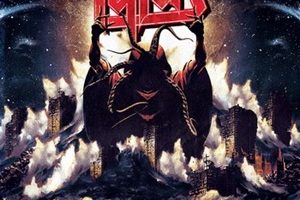