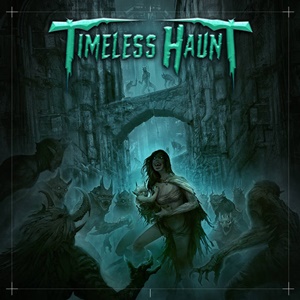 Containing three generations of musicians who don’t always see eye to eye in influences or outlook of the metal and rock genres, Timeless Haunt develops an interesting mixture that sets them apart from many more straightforward artists bubbling from the underground. Reviewing their previous Haunted Symphony EP from 2019, the band have had a couple of years to craft new material, issuing a full-length effort with Dark for Life that contains seven more original tracks plus a left-field cover choice that works with the mysterious atmosphere the quintet embrace.

“Geisterton” sets the tone of the record as a 98 second intro filled with thunder, keyboards, and cyber-low narrative accents that contain a bit of a backwards masking vibe. From there Timeless Haunt intertwines their mix of theatrical heavy/progressive metal with old school gothic overtones – layers of guitars, bass, and keyboards setting up an ominous, wide array of emotions across these arrangements. From the power riffs to doom accents on “Embrace the Haunt” to the magnificent gang-like background vocals against the Dream Theater meets Morgana Lefay-like textures musically for “526” (including some killer speed transitions from drummer John Jesuele during the latter’s guitar solo segment), it’s obvious these musicians have worked harder at tightening up the little accents and songwriting mechanics to deliver stronger arrangements that galvanize listeners and keep them at rapt attention. Capturing a thrilling sound that can be much like King Diamond, Black Sabbath circa Dio or Savatage one minute, then rearing back into Alice Cooper or Type O Negative areas from song to song, the equally versatile and varied approach of Unknown as vocalist mesmerizes a la Sean Peck, Peter Steele, or Rob Halford – sometimes within the same song as the energetic “Sinful Girl” illustrates. The record ends with Timeless Haunt tackling the early 90’s hit “Wicked Game” from Chris Issac, a tranquil song handled brilliantly through an upbeat electric guitar injection plus tapping accents from guitarist Tommy (The Electric) Eye. They really make the song their own, and that’s key to delivering a memorable cover in the modern era.

In a scene of copycats, Dark for Life contains enough distinction to put Timeless Haunt in a class more of their own. Those who like theatrical, dramatic heavy metal with 70’s progressive and 80’s gothic textures would be well advised to take a gander into this group. 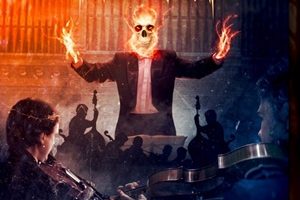