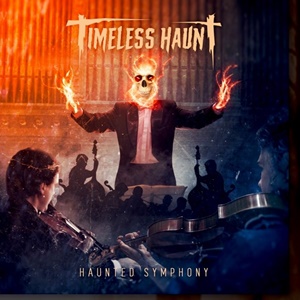 Mystery abounds in this Pennsylvania act named Timeless Haunt. Featuring drummer John Jesuele who is in Beyond Fallen, the five-piece deliver their debut EP Haunted Symphony which has among other things, an eerie atmospheric vibe against its groove-oriented melodic/progressive metal platform. Differentiation can be a great thing in a scene flooded with trend hoppers, or possibly make the climb to a following a tougher sell, as acts that usually defy categorization can be relegated to cult-like status.

The biggest curve ball for sustainable appeal lies in the off kilter, narrative talking to conventional melodic singing of the unknown vocalist (that’s what their official website lists him as). Credited with sinister laughs, demonic chants, lead and harmony vocals – he can go from low Peter Steele-like aspects to follow the riff-like commands beyond his natural multi-octave singing voice, which can create goosebumps or nails on a chalkboard reactions when taking in “Claustrophobia” over the course of it’s almost eight-minute time frame. The evil keyboards and engaging bass sets up an evil, early Ozzy meets King Diamond aesthetic for “Hellion Witch” before the mid-tempo guitar churn and steady drumming locks into this 80’s-oriented metal anthem template, some of the instrumental sections blending together Black Sabbath meets Iron Maiden swings. These musicians possess tact and tastefulness, building up anticipation even in slower measures such as the final track “Sands of Agony” where the restrained keyboards and bluesy-driven guitars give chase to some beautiful vocal harmonies during the chorus, very much a throwback to the 70’s a la Alice Cooper or early Judas Priest. The cover art also plays into the mystery and suspense of the band’s output – featuring a skull-adorned conductor of a symphony on fire.

The cinematic/theatrical aspect to many of the arrangements will remind many of late 80’s/early 90’s Savatage for certain – and that could be an aspect expanded upon in future Timeless Haunt output. Using this as a launching pad for their next record, Haunted Symphony could be a perfect edition to any collection of an open-minded metalhead that wishes to take themselves on a unique aural ride. 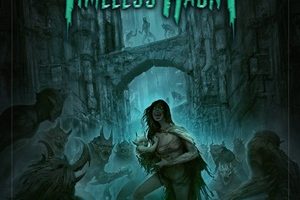