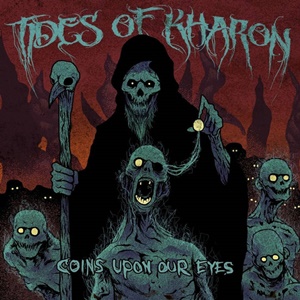 Active since 2014, Tides of Kharon from Edmonton, Canada are another representative of the latest crop of melodic death metal bands that embrace the old with the new. Coins Upon Our Eyes as the quintet’s initial offering gives the listener four tracks of effective riffs, vicious vocals, and heaps of melodic moments that should make quite an impression not just on domestic audiences, but on a worldwide scale as well. Although not privy to band bio information, it seems like based on band lineup and photographic evidence that Tides of Kharon contains three brothers in the mix, proving that metal indeed can strengthen the bonds of family.

The layers of guitars and point/counterpoint tradeoffs Ryan and Justin Rehman display showcase proper respect and affinity for the songs on hand – evident quickly on “The Winter War” where you’ll hear everything from tasteful, Metallica-esque soothing cleans to blackened trilling that rivals the best Scandinavian black bands. The opening Cam Rehman bass line for “From Medusa’s Throne” sets up another strong mid-tempo arrangement, the rollercoaster nature of the harmonization musically going toe to toe with the aggressive screams and raspy growls of Garrett Nelson, digging back into classic Whoracle-era In Flames with bits of current Trivium-like groove thrown in for modern measures. Choosing to favor Greek mythology for the lyrical content takes this scribe back to adolescence, when the Gods fought wars and developed their specialties. Hard pressed to find a favorite of the four – as they all equally get the job done for melodic death metal, but there’s something special about the machine gun riffing and swinging drum tempo of “Cerberus in Slumber” that propels adrenaline and fists to fly high in the sky.

The only disappointment lies in the fact that there are just four songs – Tides of Kharon have all the tools, musicianship, and talent to comfortably deliver a full-length at this stage without fear of repetition or boredom. Coins Upon Our Eyes will satisfy those melodic death metal hordes that need something heavy and catchy, while not being too commercial in stance.