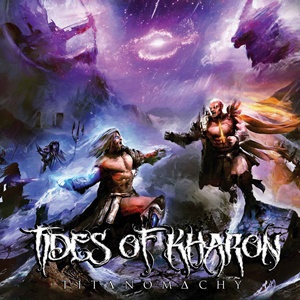 Engaging a love of Greek mythology with hard hitting melodic death metal, Tides of Kharon on paper have a winning recipe possible for their second EP Titanomachy. Hailing from Edmonton, Canada, the five-piece have been together since the mid 2010’s – releasing their first EP Coins Upon Our Ears back in 2017. The quality of the music fortunately outshines the pedestrian, zombie-themed skull-oriented cover – so where does this five-track follow-up take the band in terms of substance and songwriting?

Those who love the European style of twin guitar harmonies and melodies, crunchy mid-tempo to slightly faster main riffs, energetic rhythm section work that pounds as well as it grooves, and a venomous death growl riding over the top should grin ear to ear over this material. It’s evident that the band remember the days when In Flames lead the Swedish melodic death metal scene from Clayman backwards – but aren’t afraid to also put in a bit of Trivium, At the Gates, and Amon Amarth aspects into their musical stew. Picture tandem axe hair windmills from Justin and Ryan Rehman as their powerful chord combinations and steady melodic accents take “Sentinels of Stone” into the immediate standout, a veritable aural feast over it’s six-minute plus timeframe. The initial water sound effects lead into “Atlas Endures”, the ideal opener featuring nifty drum fills against some sick main tempo work, circular guitar melodies, and the deep bellow from Garrett Nelson that would make Johan Hegg proud. He can also rise to the blackened scream occasion when necessary, as showcased through the chorus on the monumental title track. All five cuts are top notch – each showcasing strong hooks and dynamics, even if it’s in small flashes a la the quick hitting blast beats or Metallica-esque textures in closer “From the Mountain”. And the proper Greek heroic battle scene on the cover has the grand design necessary to make people forgive the amateurish previous effort.

Now that they’ve released two solid EP’s that prove solid old school melodic death metal can be delivered in current times, Tides of Kharon hopefully will exceed expectations even more with a full-length effort – as we need more than 20-25 minute helpings to ‘tide’ our ears for the next recording. 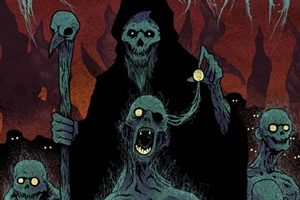