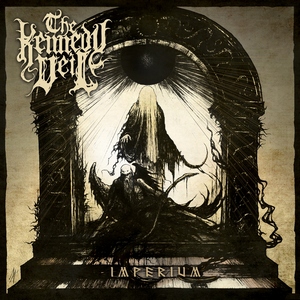 The Kennedy Veil made a big splash (in these pages at least) with their 2014 full-length, Trinity of Falsehood. A fantastically high-octane run of no-frills death metal that kept it technical enough to be interesting, but acted more like a sledgehammer in its execution. While pulling from bands like Origin with speed and intricacy, it was kept grounded with an impressive sense of melody and groove. It’s been three years, with some line-up changes in between, but The Kennedy Veil is back with an album that shows they are more than just a speed demon.

Those familiar with Trinity should be prepped that this is far from a mere second helping. While the band is still quite capable of pulling off some incredible speeds (and still do so), Imperium is more about darkness and atmosphere. The term well-rounded comes to mind, with clear modern death metal influences melding together with a more timeless attention to songwriting. While the band never fully dipped their toes into the tech death waters, there was a level of proficiency that was apparent and still is with this album (just check out “Draconian”). But the emphasis falls more into creating a brooding and bleak atmosphere than cramming as many notes as possible per second. The band is prone to really slowing things down and inserting dark grooves (see “Hunted to Extinction”), and occasionally utilizing some keys into the mix (though never at the expense of the rest of the instruments). The emphasis on atmosphere over speed gives the band a much more menacing sound. Something that far outweighs the techier stuff that can come off as cold and sterile.

Clearly there’s been some changes with The Kennedy Veil’s approach, but it’s done so in such a way that fans of their previous material should welcome it with open arms. Drummer Gabe Seeber’s blasts and fills still find a way to impress, as does guitarist KC Childer’s aggressive yet catchy riffing. New vocalist Monte Barnard possesses quite an extreme range, hitting lows, highs, and in-between with brutality and enunciation. When they choose to hit the gas, it’s as relentless as ever (see “Dawning of Wrathful Deities”), but with added blackened venom and groovy carnage. It’s a winning formula that helps them to craft songs that are as vicious as they come, yet leave a lasting impression that you’ll want to return to.

Proof that death metal band can in fact “mature” without compromising their brutality and vision, Imperium once again seats The Kennedy Veil at the head of the class. Brutality, melody, and atmosphere all wrapped into a package that is just as feral and caustic as any of their peers. At this point in the year, it’s safe to say that it’s also one of the strongest extreme metal releases you’ll come across in 2017.