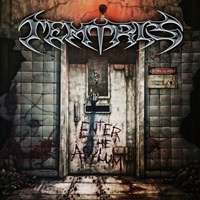 Eyes and ears around the globe seem to be paying a modest amount of attention to the Australian heavy metal scene these days, and with good reason. The adulation and successful impact bands like Ne Obliviscaris, Psycroptic, and Voyager have been making alone in terms of world tours and festival appearances (beyond Dead Rhetoric staff appreciation) based on various progressive, tech death, and melodic progressive genres speaks volumes to the public’s desire for solid craftsmanship. Containing two thrash alumni from 80’s band Mortal Sin in drummer Wayne Campbell and new guitarist Anthony Hoffman, Temtris is another long-running quintet (starting in 1999) that live for a darker yet straight ahead heavy metal style on this fourth album Enter the Asylum.

Building these songs on a healthy twin guitar spider web spin and strong, pounding riffs courtesy of Hoffman and Anthony Fox that embody a lot of old school power/NWOBHM influences, it’s evident that as songwriters Temtris studied a healthy amount of Iron Maiden and Iced Earth’s catalogs, as well as some of those offshoots. Two examples include the harmonically driven “Break the Skin” (love some of the triplet drum patterns from Wayne in the final third of this cut) and the sinister mood shifter “Empty Room” where bigger doom-like chords transform against a King Diamond-like instrumental section while the acoustics and electrics build tension and excitement for Genevieve Rodda’s stellar multi-octave range and impassioned falsetto screams. They even stir up a little epic/Manowar-like brothers in arms anthem for “Seasons of Decay”, the guitars, bass, and drums serving as weapons in tandem, leading that march for battle to the death.

As great as Temtris is on the musical front, kudos need to be given to Genevieve for her powerhouse performance throughout these 11 tracks in the main (12 overall, as “R.A.M” is a 61 second intro). If Leather Leone ever needed a vocal doppelganger, songs like the title track and the thrashier “Darkness Falling” give living proof that women can belt out heavy metal toe to toe with the pioneers who put traditional/power metal on the map. Add in the ‘battle of inner demons’ lyrical content plus matching cover art and the total package speaks to the traditional, dark recesses that spooked many when first taking in heavy metal.

Choosing to be a little more aggressive than 2014’s equally satisfying Shallow Grave, Temtris are peaking at the right time and should be embraced by a number of traditional, power, and thrash-oriented followers with Enter the Asylum. 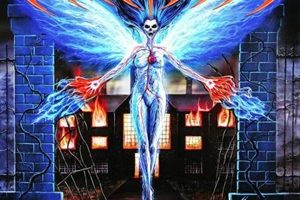