A Tolkki-less Strato, eh? That’s like a Mustaine-less Megadeth or a Schaffer-less Iced Earth (which might be a good thing). Now finally beyond the soap opera that led to the axeman’s apparent dissolution of the band in early 2008 to its subsequent reformation with new guitarist Matias Kupianinen, Stratovarius returns with Polaris, a very safe and deliberate album that lacks the bombast and zeal that Tolkki so adorned the band with.

Songwriting duties are now splint amongst the remaining band members (who include singer Timo Kotipelto, drummer Jorg Michael, bassist Lauri Porra and keyboardist Jens Johansson) and while there’s slightly more variety this time out, there’s nothing on par with Visions and/or Infinite. Granted, “Falling Star” is a top-notch mid-tempo power metal rocker and the Johansson-led “King of Nothing” is a winner, but whereas Stratovarius used to dazzle and go over-the-top, they now appear to be willing to fall in line with the rest of the power metal world.

Johansson emerges with the best track on the album, the kinetic “Blind” which is right out of the band’s over-used, beaten to death sound of the late 90’s…and is awesome. Kotipelto should be given more material to belt like this, as opposed to the meandering, predictable “Forever Is Today” or “Higher We Go.” He does, however, work some magic during “Somehow Precious,” the first Strato-ballad in years that doesn’t come across as contrived drivel.

Considering this scribe torn on Polaris. On one hand, it’s cool to see the founding fathers of Finnish power metal carry on, seemingly at ease with one another, yet on the same token, it was Tolkki’s occasional moments of insanity-driven brilliance that propelled Strato to the top of the power metal heap. This isn’t 1997 anymore and Stratovarius realizes this, but one has to think this might be one of those rare instances where totally plagiarizing one’s previous work would do the trick. 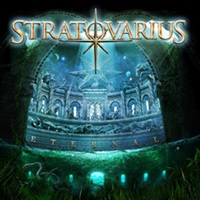