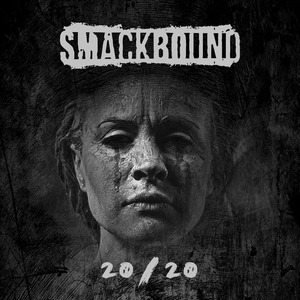 Smackbound may be a brand new act, releasing their first album with 20/20, but they have a wealth of talent in their ranks. Comprised of some members of Tracedawn, Stratovarius, and Teemu Mäntysaari of Wintersun, there’s a whole lot of metal experience going on. Add in vocalist Netta Laurenne, who herself has guested on a number of tracks for bands in the last decade (Amorphis and Lordi among them), and you have something that’s brimming with potential.

If you are expecting a melodeath extravaganza though, this is not it. Smackbound plays a unique rock/metal hybrid that’s pleasantly tough to really pinpoint. There’s a nice, hard rock attitude and edge to the tunes, particularly cuts like “Drive it Like You Stole It” and “Hey Motherfuckers” that make them feel like they wouldn’t be a tough sell if they were able to launch on the radio. But there’s also more frantic side to songs like “Wall of Silence,” with driving riffs and metallic flair to the drums – alongside a solid dose of modern synths. “Run” feels more akin to modern metal as well, with a poppy chorus coupled with electronics and riffs a la Amaranthe. Slower cuts like “The Game” and “Wind and Water” then bring a gentle touch to the act, with soaring synths but still retaining enough grit below their surface to let them hit home emotionally without becoming too saccharine in tone. Laurenne nails the vocal performance, being able to carry the material with palpable energy and emotion, and really sells the attitude of the music behind her.

All in all, 20/20 successfully merges the synths and energy of modern metal with the fun and rollicking attitude of hard rock into something that the band can call their own. Strong vocals, catchy riffs and solos that don’t go too overboard, and a nice mix of tracks make it a great introduction to a band that seems like they can go places as they continue to tweak the formula.