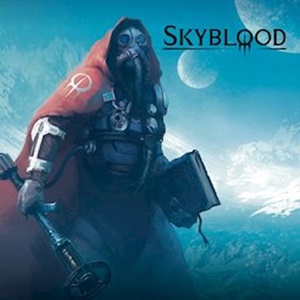 After establishing a musical resume that includes recordings and live escapades with Yngwie Malmsteen, At Vance, Therion, and Candlemass just on the short list, singer Mats Levén decided to release his own solo project with the aptly named Skyblood. Years in the making as far as songwriting and recording, we finally get to hear the fruits of that labor in this self-titled debut record. Mats would be responsible for the lion’s share of instrumentation, songwriting, recording, and producing – rounding things out with bass/drum support from friends he’s known in the scene along with the occasional lead guitar break assist. In the end, many will probably be surprised at the man’s versatility and abilities – as this is a record that will broaden minds and horizons for blurring genre lines and developing addictive hooks and arrangements in the process.

Industrial and alternative overtones penetrate “The Voice”, Mats using layers of mid-range and higher melodies to convey a colder musical pulse throughout, the drumming and abrasive guitars channeling a bit of Strapping Young Lad as his vocals tiptoe between David Bowie and Geoff Tate. Epic and classic textures also factor in “Wake Up To the Truth”, low-tuned guitars churning at a slightly faster than doom pace, the tempo very hypnotic as the keyboards dance in and out as the listener succumbs to the power of multiple Levén-driven voices – ominous, tension-building, and powerful depending on the verse/chorus at hand. For those who love progressive, melodic hard rock fare, the ten-minute plus closer “Le Venimeux” contains bristling kitwork and dynamic somber piano parts to driving acoustic/electric propulsion, while those who love melodic groove-driven dramatic metal fare will find “One Eye for An Eye” pushes all those old Kamelot/Queensrÿche-ish aural buttons. Channeling the lyric content through the character of Skyblood, you’ll get a mixture of pride, empathy, and rage in the words of Mats – his professionalism and sterling delivery never wavering this deep into his career.

Skyblood is a left field turn from the man’s normal power, symphonic, or doom territory that most metal followers are aware of. That doesn’t negate the output and quality contained within, and assuredly those ardent mavens who appreciate risk or challenge when it comes to their records will delight in Skyblood’s intensity and broad vision.