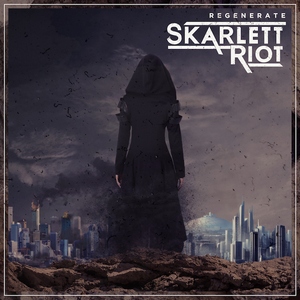 It’s always an interesting thing to see a band get heavier as they move forward in time. The debut full-length from this English group, 2013’s Tear Me Down, packed a more hard rock feel to it. Once could sense a bit of transition with last year’s Sentience EP, but it seems to come a few steps further with Regenerate. The band has successfully implemented a more metallic edge to their sound, one that should be quite appealing to those on the more modern side of things.

Skarlett Riot kicks things off into full throttle on the opening “Break,” and doesn’t seem to look back. An explosive drum performance effectively brings things up to tempo, where the combination of some heavy grooves and galloping guitar lines twist themselves around vocalist Skarlett. It’s high-energy, with plenty of payoff that comes in the form of a chorus that feels immediate without settling for simplicity. Other more adrenaline-pumping numbers like “Closer” and “Warrior” thrive on this same concept – injecting modern grooves into a speedier tempo with some rock attitude thrown into the mix. It allows for strong contrast when they lean into some leadwork, which tends to entertain a more melodic feel. Skarlett’s vocals seem to have no problems adjusting to the shifts into heaviness and melody, bringing a potent energy and flair to the more exhilarating material, such as “The Storm, but also unafraid to bask in some emotion without sacrificing power with more gentle tracks, like the standout “Calling” or “Affliction.” Be it melodic or more groovy, the band never seems to lack for hooks, either vocally or instrumentally, which embed themselves into the listener unapologetically. But the most impressive part about them is how they stand up to repeated listening – this is well-structured material that you’ll have a hard time ignoring even after listening well past the double-digits.

Impressive to see a young act increasing the heaviness – it’s clear that they are also hungry to find what works for their sound. Regenerate has some massive reach because of it – melding metallic aggression with hard rock immediacy in a way that complements both. Skarlett Riot is onto something worth investing in and seeing where they go with it.