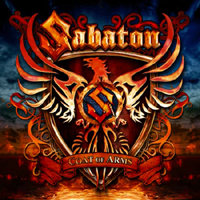 One of the acts from Sweden gaining critical acclaim for their brand of traditional power metal with lyrical war themes is Sabaton. Coat of Arms represents their sixth album and biggest label development, gaining the attention of long standing heavyweight Nuclear Blast. Will the bigger promotional and publicity force result in a larger following as a result?

After a while, the choir background chants that carry on from verse to verse do get a bit predictable and a tad overbearing, almost making you wonder what songs like “Aces In Exile” or “Midway” would sound like if they didn’t pile on the layers. Be aware as well the keyboard-to-guitar presence throughout the record is very close to a 50-50 dead heat, and once again emphasizing an act who realize possible commercial implications to their brand.

Primo Victoria remains the high mark for me in Sabaton’s catalog, and I don’t feel Coat of Arms moves much beyond a tried and true, safe effort. Let’s hope they continue to gain ground on the live front, where they appear to make an impact both stateside and abroad.