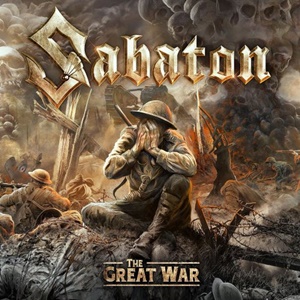 The Swedish pagans of military metal Sabaton return to tackle the subject of World War I for their ninth studio album The Great War. It’s obvious what to expect from this veteran band in terms of catchy choirs, bombastic musical hooks, and attention to super solid songwriting mechanics – but the ability to visually capture the atmosphere of the battles and conflicts into an aural context is quite spectacular. From the first track to the final salvo, it’s apparent that dynamics and diverse tempos/arrangements prove Sabaton are willing to throw a few surprises into the mix that pay dividends for the album’s longevity in the hearts of their fans.

The triumphant keyboard strokes for “82nd All the Way” allow Joakim Brodén to tell the story of the American Army airborne infantry division and their entrance into the war in 1917, the choirs during the chorus matching the guitar/keyboard syncopation for an energy charge. The follow-up “The Attack of the Dead Men” possesses a bit more electronic/80’s textures – the drumming mid-tempo groove movements from Hannes Van Dahl marching in unison, another early highlight in the track listing. Breaking out some swinging Hammond organ features, “The Red Baron” has that commercial slant that’s easy to pick up on and careen for years in the brain, another chorus that should go down a storm live. Of course there are heavier cuts where the guitar playing gets to develop nifty power bursts and catchy little trailing melodic refrains – check out “Seven Pillars of Wisdom” and “A Ghost in the Trenches” for that European charm that reverts to aspects of the Primo Victoria and The Art of War days. For those who love dramatic twists, look no further than “The End of the War to End All Wars” – a tranquil piano-oriented beginning transposes into orchestral/choir-laden bombast, the arrangement see-sawing much like the most important sequence that concluded World War I. The infamous war poem “In Flanders Field” is a fitting conclusion, a mix of female and male voices ringing out the words in somber reverence.

The album conveys darker/heavier themes in proper respect, while engaging people into the Sabaton coven. The Great War continues the creative hot streak for these musicians – gaining well-deserved headline status and ready to keep their military metal flowing for decades to come.