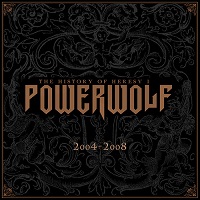 Elevated to Euro festival headliner status…doesn’t get much bigger than that across the pond, ya know? It’s a spot reserved for the big guns; the anthem-bringers who generally fester in the melodic and/or power metal bin before getting the call up. For Germany’s Powerwolf, it’s been just above a ten-year journey, which is somewhat remarkable in this day and age of band ballooning and the scene’s inability to find those elusive “next man up” headliners. Indeed Powerwolf are the next men up, and here to supplement such a feat is the impressive The History of Heresy I (2004 – 2008) box set.

The contents here are quite sprawling – three discs, including two full-lengths (Lupus Dei, and Return in Bloodred), and multitudes of bonus and live tracks, not to mention a 112-page hardcover booklet. Again: Excellent timing considering how the band has broken big in Europe. As for the tunes, they are largely of the anthemic variety, spun up through the band’s spooky/opera themes, of which are display during the rousing sing-a-along “Mr. Sinister,” “Black Mass Hysteria,” and perhaps the band’s best early jam, “The Evil Made Me Do It.”

Powerwolf’s secret sauce lies with vocalist Attila Dorn, who has one of the more identifiable shrills in Euro metal. Even if he’s not as rangy as most festival headliners are, his note choices and delivery are spot on, and rarely overextended. Sure, some of these songs can be on the cheeky side (see: “Saturday Satan” and “Vampires Don’t Die,” both of which are campy as well), but the ring out with flavorful melodies that compensate for any shortcomings the band may have in the musical department.

DR will attest to not fully being on the Powerwolf bandwagon thanks to the so-so nature of 2011’s Blood of the Saints and marginal value of last year’s Preachers of the Night, yet the all-encompassing nature, along with catchy-as-can-be tunes found on The History of Heresy could make us a believer. As it stands, this is a total must-have for the fans, who are growing by the droves…