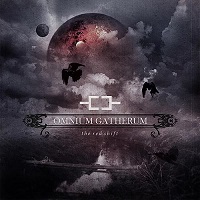 Omnium Gatherum.  The mere mention of the band is enough to cause most of us here at DR to get a case of the warm fuzzies and maybe even drool a bit.  It wasn’t always that way though.  OG’s first few records saw the band at loss for their own identity, but it was The Redshift that made many stand up and take note of a band that had finally found their own way.  Recently reissued by Candlelight while the band is in the midst of their first go-round in the ‘States and receiving their deserved fair-share of accolades from the excellent Beyond, there’s not much in terms of extras save a few live and demo tracks.

Looking back, it’s easy to see The Redshift as the beginning of great things to come.  Even the band mentioned in a recent piece here at DR that it was “the album which really started to define OG’s art.”  With a top notch production courtesy of Dan Swano and an extremely cohesive album full of quality tracks, it’s easy to see why eyes began turning towards Omnium Gatherum as one of the fore-runners for melodic death metal once The Redshift was released.  From the opening flash of “Nails” to the driving key/guitar combo of album highlight “A Shadowkey” to the ballad “Greeneyes”, OG does not miss many steps.  The closing duo of instrumental “Song For December” and “Distant Light” especially hint at the more elaborate, but no less immediately satisfying the band began striving for with longer tracks.

The clean vocals may feel a bit rougher, and the melodies of New World Shadows and Beyond may feel a bit sweeter, but it’s hard to complain about anything here from a melodic death perspective.  With the lack of must-have extras, there’s no real reason for none but the obsessively die-hards and those late to the OG party to pick this one up.  This does however, provide the definitive version of an album of that sees Omnium Gatherum finding their identity and reach for that cusp of greatness that they’ve held onto ever so tightly since.