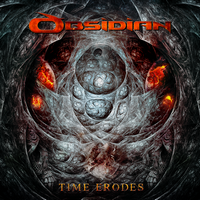 Hailing from Vancouver (well, technically they are an international group but use the city as their home base), Obsidian takes a host of clearly defined influences and somehow whips them into something that is more than meets the eye. It doesn’t hurt that their influences are some solid (and slightly less frequently used) ones.

Time Erodes mostly comes across as a modern take on some death metal with groove. One of the album’s biggest strengths are the vocals. Not the typical death metal roars, they come across more like Gorefest’s Jan-Chris de Koeijer, with a throaty (and more distinctive) flavor. Some may not think they are the perfect fit initially, but they definitely grow over time and help to make the band standout. The riffing borrows heavily in the groove department from Gojira, which tracks like “Useful Idiot” are unabashed with similarity, but they do offer a mean bite and it doesn’t detract from the overall feel. There’s also a classic machine-gun riffing/drumming influence from Fear Factory that comes out during “Revolution Dead” that is effectively used. There are some more modern groove metal elements and more traditional death metal elements that round things out for the band, but it’s the combination of everything that makes tracks like “Broken and Defeated” (which has some nice Stockholm-ish melodies that borrow without stooping to retro levels) and “On Your Feet” real neckbreaking tracks.

While still wearing some influences on their sleeves, Obsidian starts cutting a pathway of their own on Time Erodes. There’s plenty of potential for the band to impress with their next few rounds, particularly if they can fuse some of these influences together into something even greater. A solid introduction to the band. 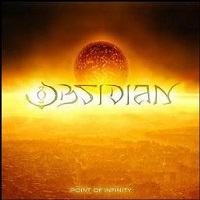