Sometimes life just gets in the way. We’ve gone two months without a solid Bandcamp piece so it was high time to get the ball rolling once more, as these are some of the most fun and rewarding features to write (personally speaking). With plenty of catching up to do, this month we investigate some releases from A Diadem of Dead Stars, Blind Revision, Burial in the Sky, Countless Skies, Dalla Nebbia, Hinayana, Lever of Archimedes, Obsidian, Sympuls-E, Torturous Inception, Tyrant of Death, and Vulture Locust.

As equally dreamy as its fantastic cover art, the two-track follow up to The Mist Bearer does not disappoint. Effective contrasts between retrained melodies and acoustic segments with the melodic black metal riffing may not be anything new at this point, but they are done with zest and vigor. There’s some real emotional weight, even in the stark and not so metal “A Blood Red Sun Sets on Wintry Shores,” a completely ambient piece that accompanies “The Mist Bearer (Part II).” The title track is obviously the main event, and really gives in 12 minutes what many bands of this ilk fail to deliver in a longer event: depressive majesty.

Another one of those “straddling the metal line” type of bands, Blind Revision opens strong out of the starting line with “Fight or Flight.” Strong, progressive melodies lead the way until vocalist Jen Janet begins to introduce her soaring vocals into the mix. Together, it’s an intoxicating mix of melodic riffs and soothing female vocals with just enough crunch to appeal to the metal crowd while still being able to flirt with a more expansive audience. A song like “Tough Love” feels a bit like some of Brave’s strongest material, using a catchy melodic backdrop when Janet’s vocals take the forefront, but always displaying that they are capable of lush acoustic material and melodic leads. Will be interesting to see where they go from here.

Catching these guys over the summer on a gig with Rivers of Nihil/Black Crown Initiate, they stood out in a night of death metal due to their grasp of atmosphere. Transcendence displays that same mastery of atmospheric/trippy elements within the technical death metal framework. “Despoiled Corpse” features some stunning leadwork, and all three tracks illustrate a picture of a band that isn’t afraid of using extended leads, all the while keeping them interesting and playful in their atmospheric resolve. There’s a feeling of being whisked away during the ending of “Cognition Transference” that many a more established band would rightly kill for. This EP being over a year old, hopefully there’s more in the near future here – there’s plenty of potential to unlock moving forward.

The Countless Skies EP last year was an excellent piece of melodic death metal, so the band quickly earned a spot in the “new acts to keep an eye on” list. “Solace” is the band’s latest song, and shows the same tasteful and sorrow-filled display of melodic death metal that worked so well on their EP. The epic and grand sense of the riffs can’t be undersold, feeling much more like an older band with their reverence. This song is full of majestic and absolutely killer melodies. The clean vocals are also worthy of mentioning (along with the absolutely killer riffs that hide beneath them) as they add a nice complement to the middle of the track. Thoroughly ear-pleasing melodic death metal; it’s just a matter of time before the world catches onto these guys.

Elegant and somber, Dalla Nebbia isn’t your usual take on black metal. Featuring violins (by Sareeta) in a number of tracks, there’s a mystique to the album that gives it an almost doomy grandeur from time to time. There is a black metal base, for sure, as heard in “Abandon Unto Sky,” yet other tracks take a more progressive structure that is full of gloomy melodies (“Paradise in Flames”). The tracks aren’t predictable jaunts either, with both of the afore-mentioned tracks easily switching gears on the fly without sounding like a jumbled mess (as well as the rest of the songs). It’s the type of thing that could pique the interest of bands like Enslaved or Borknagar in a heartbeat or even appeal to doomsters like My Dying Bride.

Hinayana is a one-man doom band from the mind of Casey Hurd. Given the location of Texas, you’d never guess it as it feels much more akin to the Scandinavian doom/death metal scene, with easy comparisons to bands like Swallow the Sun, Insomnium, or US flagbearers Daylight Dies in terms of both sound and quality. Endless oozes with atmospheric charm, harnessing the power of slow, churning riffs for all their worth and integrating them with melancholic and often sweeping melodies. “Pitch Black Noise” might be the pick of the litter, with some Omnium Gatherum-esque dreamy leads and just enough of the Katatonia-styled droning to put it all together. Exceptionally well put-together for a first outing, even more so that its being done by one individual.

Hailing from the US Capital, Lever of Archimedes play some tastefully over-the-top technical death metal on Triptych Disentanglement. A three song EP, it’s a good showcase of what the band can accomplish as notes spiral around in your head until the point you become dizzy (just listen to the opener, “Wraith of Onus”), yet there’s also something inherently catchy about what they do. To blend the level of technical playing that one hears on the chorus of “Illusory Devils” with rich melodies (and rolling bass lines) is an indicator that these guys are going to be heading up the ladder rather quickly. Technically impressive yet memorable is a strong skillset to have at such an early point as a band.

Obsidian touch upon the good ole days with No Self to Sue. Plenty of hardcore and punk attitude backs up the sometimes galloping, thrashy riffs (like on the appropriately titled “Into Battle”) and harkens to a time where metalcore wasn’t such a disgusting word, but an appropriate one when discussing bands that took a liking to both genres. Other tracks bring some well-placed chugging grooves (“Final Stand”) or striking melodies (the title track) to give a rather large variety to such an album. It’s not just piss & vinegar, but equally full of memorable licks and even a smidge of atmosphere.

Heavy on the upbeat keyboards, Sympuls-E’s latest does fall safely alongside some of the more modern acts of the genre. Though the guitar melodies effectively pull things a bit further towards the Disarmonia Mundi range (read: gorgeous leadwork) than the usual suspects. There’s no shortage of somewhat futuristic melodies and riffs (particularly when coupled with the keyboards) to be found, and for any melodeath fan, it’s an intoxicating mix. The vocals are just as solid, with some strong screams followed up by some cleans that never go too far towards the mainstream direction. Solarstorm gives ample evidence there’s plenty to love about the genre, and should get plenty of people talking.

Nothing wrong with a little old fashioned NYDM from time to time. Particularly when it actually hails from the source region. Headfirst into Oblivion has all the hallmarks of the NYDM scene and wears them proudly. Powerful growls, thunderous drums, and devastating riffs fill the album from start to finish, with nary a moment to catch your breath. There’s no shortage of memorable riffs either, with “Strategic Disembowelment” starting out from the gates with one of the strongest, and “Gored by Horns of Judgement” offering a ripping solo. And of course, plenty of brutal, NYDM breakdowns (see “The Last Infected”). Intense stuff from Torturous Inception, and well worth seeking out for the death metal aficionado.

Enjoy your metal with an industrial/electronic edge? If you’re answer is yes, Tyrant of Death is a name that you should look into immediately. Pulsating synths, machine-gun drumwork, heavy-as-nails riffs, and a sci-fi atmosphere all come together with this one. What initially stood out was the Demanufacture-era Fear Factory feel to with the hard, industrial edge. It really comes out in the more driving tracks like “Alloy Overdrive” or “Acheron,” while there’s a more notable electronica influence on songs like “Reflection” and “Cyclotron.” One’s tolerance for the electronic elements may be tested from time to time, but there’s no denying the impressive songwriting on Ion Legacy. This feels like a taste of the future!

A fifteen track onslaught of monstrous death/grind with some elements of sludge, black metal, and crust is what you can expect to hear on Command Presence. “Resolution of a Conflict” begins with distorted and rumbling guitars, blasting drums, and crazed vocals in the manner you’d expect from a grindcore outfit. The intensity drives things forward throughout, with 2-3 minute bursts keeping it to the short and sweet while keeping a little bit more song structure intact than the usual 30 second hit-it-fast mentality of some grind bands. The lyrics (available at their Bandcamp page) are also worthy of note, with intriguing viewpoints to the usual politically-based slants. 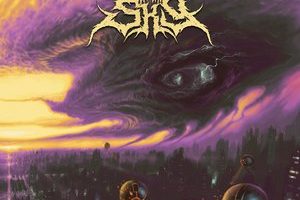