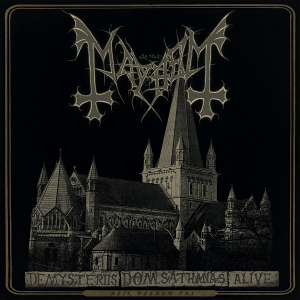 Not sure if this is a record or not, but De Mysteriis Dom Sathanas Alive is Mayhem’s sixth live album. Indeed the early cult recordings with Dead on vocals and Euronymous on guitars respectively are worth an undead go in the realm of messy black metal, but, the Maniac era? Eh, it doesn’t hold up as well. De Mysteriis Dom Sathanas Alive happens to be the first Mayhem live album to feature long-running vocalist Attila Csihar, and as the title suggests, is the full airing of the band’s legendary, genre-defying 1994 LP of the same name.

Recorded live on December 18th, 2015 in Norrköping, Sweden, the album features only the eight songs from the original album, nothing more. Csihar doesn’t have much in the way of stage banter, while the crowd is a smidge quiet. (A ruckus black metal show this is not.) The duty of replicating Euronymous’s guitar lines falls onto Teloch and Ghul, both of whom handle Euro’s bizarre, discordant, but inventive chord shapes. Of particular note is the Hellhammer-led “Funeral Fog,” which remains Csihar’s finer moments as a singer, while the blustery “Pagan Fears” and smoldering “Buried by Time and Dust” demonstrate the sort of riff longitude that could only come from Norwegian black metal’s second wave.

Self-released by Mayhem (they remain on Season of Mist, though), De Mysteriis Dom Sathanas Alive is intended to set up the band’s forthcoming winter 2017 tour, in which the album will be played in its entirety. The original, as you would imagine, cannot be topped, but Mayhem anno 2016 is more than capable of upholding the diabolic vision of Euronymous.