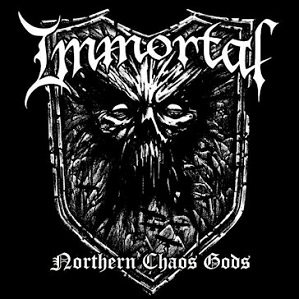 Immortal, to the frustration of many, quickly stalled out after the release of 2009’s All Shall Fall. Several theories exist as to why, none of which are important at this juncture since Abbath has gone solo and Demonaz and Horgh have carried on with the name. Abbath’s 2016 self-titled debut effort was a work of near-brilliance, albeit without the frost-bitten landscapes that so defined his tenure in Immortal. Northern Chaos Gods, on the other hand, is a full return to the windswept, mountainous glory that first helped Immortal rise to prominence. It is, in other words, a sterling comeback.

Returning guitarist Demonaz has the heaviest burden to carry here. Abbath’s riff tactics became Immortal’s defining element during their unbeatable At the Heart of Winter, Damned in Black and Sons of Northern Darkness three-album run, transitioning the band from icy black metal to what best could be described as riff-intensive Norwegian metal. Demonaz has made a concerted effort to inject blackness back into Immortal, as evidenced by the opening title track and the ensuing “Into Battle Ride.” Forceful blasters, both recall the band’s Battles in the North period.

Northern Chaos Gods hits full gallop across the frozen tundra of “Gates to Blashyrkh,” where a patterned clean guitar break sets up a memorable staccato section. And while the treacherous “Grime and Dark” and “Where Mountains Rise” provide an additional platform for the superlative Horgh, it is closer “Mighty Ravendark” that serves as the album’s all-encapsulating moment, a veritable reach back through Immortal’s storied past, all rolled into one song.

Immortal has answered the call with Northern Chaos Gods, effectively calling Abbath’s bluff and reestablishing the band’s name in the process. Your move, Abbath.