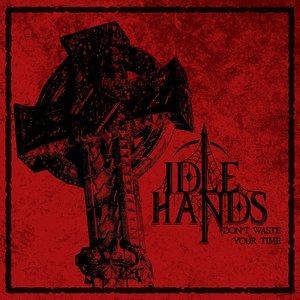 Ever wondered what traditional metal or NWOBHM would sound like through a gothic lens? Perhaps throw in a little bit of ‘80s new wave and occult rock to go along with it? Portland’s Idle Hands are here to make a statement, and it’s one that’s well worth listening to. To be able to jump out of the box with something this refreshing and vibrant is a rare find indeed.

Formed after the dissolution of Spellcaster, Gabriel Franco mans the vocals and rhythm guitar here, and he’s not out to simply ride on previous coattails. Seemingly merging the souls of Iron Maiden, The Sisters of Mercy, and The Cure together into a functioning unit, Don’t Waste Your Time is addictive and moody at the same time. There’s plenty of NWOBHM-esque guitar melodies and heroics within each track, and they will often bring a smile to one’s face without effort. From the rousing opening gallop of “Blade and the Will” to the more melodic and gloomy closer “I Feel Nothing,” each track is loaded with guitar licks practically guaranteed to stick into your head and cause involuntary fist-pumping. Then there are the vocals, of which Franco sports a more gothic baritone, with sprinkle the music with a more unique touch. Again, each track is overflowing with vocal hooks to match the rest of the music, but the strongest point is the genuine emotion flowing from the lyrics. The arguable centerpiece, “Can You Hear the Rain” takes a solid metallic base and brings it into more vulnerable gothic territory without the accompanying cheese – it’s something one could imagine taking over the charts had it been released in the mid-‘80s.

With a 20-minute runtime, it’s easy to give Don’t Waste Your Time a good 2-3 spins all at once without a care. The music is entirely engrossing from start to finish, with some familiar vibes while keeping an open and fresh approach that has some pretty wide crossover appeal once word of mouth gets out about them. Idle Hands are onto something huge here if they play their cards right, particularly with a full-length set for 2019.