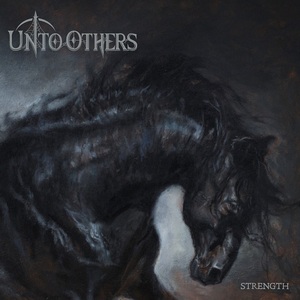 There were a lot of massive (and excellent) releases last month, no matter your taste in metal.  In our very close race though, the much favored Unto Others managed to capture the top spot, much like with their debut Mana (then known as Idle Hands).  The band’s particular version of heavy metal meets gothic metal meets ’80s new wave has gotten more intricate and intriguing since the last time we heard from them, this time providing a more aggressive outlet while keeping the dreary (and oddly upbeat) metallic nature of their debut intact.  An excellent sophomore effort that sees the band truly strengthening their formula and further impressing the community.

After justly storming the metal world with their debut EP and full-length Mana, the then-named Idle Hands were renamed as Unto Others as well as picked up by Roadrunner Records.  Strength is the much-anticipated follow-up to Mana, and while it carries much of the same spirit as that offering that made the act such an impressive force, it also sees the band diversifying themselves and putting some genuine polish on some parts to allow and even brighter light to shine forth.

Strength takes the best parts of Unto Others’ sound and augments it into new directions that the band employs with ease.  A sound that’s just as wildly addictive, fun, and unique as anything that they’ve previously released, Unto Others should hopefully continue to ride on their own well-deserved buzz as they continue to move up the ranks.  Darkly spun heavy metal that somehow makes the gloom and dreariness of it into a catchy thrill-ride, Strength should easily sit alongside some of 2021’s best efforts.