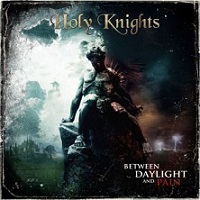 I’m not sure I understand the logic behind the reformation of this band, given the glut of power metal bands already in existence, but Holy Knights has returned after 10-year absence. Their new full length is called Between Daylight and Pain and I am wondering why I found it so ho hum, instead of finding myself becoming dazzled by the majesty of what this band claims to bring to the table.

For the record, I enjoy a quality power metal release, especially when there’s a neo-classical edge woven into the sound. I can also go ape-shit over hyper-charged drumming and virtuosic guitar playing, to match the range of powerful vocals on a solid effort. So when it came time to spinning this disc, I found my interest level waning after the second song had finished. I expected to hear agood deal

of symphonic fantasy worship, but that was dropped for a slick progressive power approach instead.

The album is not entirely a lost cause though. Vocalist Dario Di Matteo can reach soaring heights on such numbers as “Wasted Time” and “Mistery,” but also pull back enough to give a superlative performance for the closer “The Turning to the Madness.” As far as singers go, his performance here is viable and comparable to what you hear on a Rhapsody of Fire or Fairyland release. He also handles all the keyboards played throughout the album, but don’t expect his playing to go beyond the cheesiness level.

Ultimately, this album is being considered a comeback release, and I would suggest that fans of good, old-fashioned Italian power metal might enjoy this. I, for one, wanted something a bit more dynamic and wished they stayed true to the ethos of over the top medieval-themed metal that was prevalent on their debut recording from 2002. It’s wishful thinking on my part, but at least we get a band attempting a more mature and modern sound and that has to count for something.