For those of us pre-internet ladies and gents who spent our adolescence combing every source for the latest and greatest heavy metal, these are vibrant times in 2014. Research away at your fingertips – and enjoy newer bands who take early, formative sounds and make it their own. Chris Black (aka Chris Maycock) has decades of experience under his belt – his writing for Metal Maniacs magazine legendary, and his output for Superchrist, Dawnbringer, and Pharaoh winning accolades and acclaim across the globe.

High Spirits is a solo outing studio-wise for Black,  turning into a full entity on the live front, gaining European festival/tour action last spring in support of their second album, Another Night from 2011. The third album You Are Here appears to have High Spirits poised for an underground breakthrough, at a time when their NWOBHM/traditional ‘good time’ riff leanings are on the radar screen of ardent metalheads. To those unfamiliar with acts like Trespass, Blitzkrieg, early Iron Maiden, Saxon,  the nine songs on this record have their teeth cut from that cloth. Hooks early and sinking in often – twin guitar harmonies of a slow to mid-tempo variety, and chorus melodies that are simple yet remarkably effective in carrying the good time message loud, proud, and worldwide.

“When the Lights Go Down” opens in fiery form, a Maiden-like guitar segment weaving in and out to carry home the fist pumping riff movements, and I love the occasional double snare hits signaling the next verse transition. “I Need Your Love” has a little bit more of that early Sunset Strip action going on – possibly something like early Ratt-meets-Aldo Nova, while “One Thousand Nights” hammers home twin guitar ecstasy again as Black’s soothing clean voice brings you back to open highways, cruising parties, and bonfires full of celebration through beer and best friends.

“High Spirits” concludes – a resurrection of a track first appearing on the self-titled debut. This version has multi-track vocal harmonies that blow the original out of the water and is a little shorter, but still contains the double guitar harmonies necessary to drive the hooks home to the cranium. You Are Here may be the best NWOBHM album you’ll hear this year. Crank it up and tear the roof off. 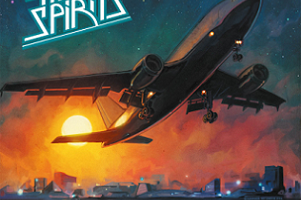