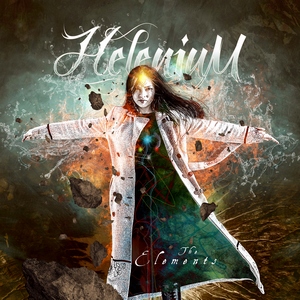 Perhaps recognizable to DR frequenters due to her being the lead singer of power/symphonic act Persona, Helenium is Jelena Dobric’s solo debut. A five-track EP based around the natural elements (Aether, Air, Water, Fire and Earth), it’s the type of release that’s conceptual and has a vibe all to its own. Just don’t expect something that is heavy in the least.

The Elements carries itself entirely on Dobric’s vocals and piano. While each track is sprinkled with some smaller components (synths, percussion, etc), it makes for an intimate performance. Something that is quite often reflective and draws you in with its gentle tones. Given the sparse use of instrumentation, it’s to Dobric’s credit that not only does each track capture a unique and somewhat exotic vibe, but it also really pulls you in. All in all, the tracks have a dreamy feel to them, particularly the closing “From the Ashes (Earth).” Though it’s hard to really put a finger on it, the dreamscape-y quality of the tracks (like “Innocence (Water)”) doesn’t evoke a direct comparison to a film score, but that same sense of scope is there in the music. The track that stands out from this is “In Flames (Fire),” which makes sense due to the nature of fire itself. It’s a more direct track with some towering immediacy, even if the middle of it does have its more somber moments. With much of the music pointing towards Dobric’s singing, it gives her a chance to show off a different side of her voice, and each song proves her ability to command the listener’s attention with some delicate notes.

Though it’s bound to draw in Persona fans due to the focus on Dobric’s vocals, Helenium wisely feels like nothing else. Perfect for some calm moments of self-reflection or to take a break from some of the heavy music on rotation, The Elements leaves a gentle yet sustained impact. Releases that take a more unique path are often more rewarding in the long run, and Helenium captures a sense of wonder that listeners should cherish.