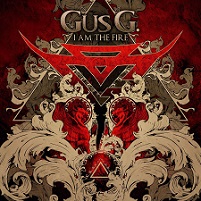 The argument exists in relation to Gus G. doing a solo album is that he already has Firewind, so why not focus one’s energy there? Then again, for reasons of the inexplicable variety, Firewind hasn’t become the power metal launch pad it should have been – ‘ole Gus has had to go the Ozzy route for his much-deserved notoriety. So this is probably where the idea to do a solo album has come in for the Greek guitarist – he can get much more mileage out of this then a regular Firewind release.

I Am the Fire goes the proverbial guest vocalist route, the most notable being Mats Leven of current Candlemass/former Therion fame. Leven is a tried-and-true melodic metal singer, owning one of the best voices in the business, which is why straight-rock cuts like “My Will Be Done” and the fun “Blame It on Me” emerge as the album’s early high points. The title track (with vocals from Blake Alison of Devour the Day) along with “Break Away” (featuring Alexa Rodriguez of Eyes Set to Kill) go a bit too far in the commercial rock direction, especially the title track, which sounds like a bad Trapt/Chevelle combo.

The instrumental cuts – “Vengeance” and “Terrified” – are naturally, the most metal jams of the lot, so the co-mingling of these, with the radio-friendly songs gives I Am the Fire the angle that a traditional Firewind album wouldn’t necessarily have. Plus, the inclusion of Jeff Scott Soto on “Summer Days” and Evergrey’s Tom Englund on “Dreamkeeper” are more than enough to give this the scene cred stamp of approval. Therefore, consider G.’s first solo foray a success. It’s an all-star assemblage without diminishing who the real star of the show is, which is G, rather, Kostas Karamitroudis. (That’s his real name.)