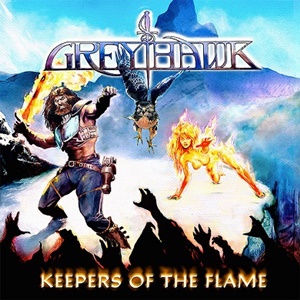 Seattle is best known for the 90’s grunge/alternative rock movement – but there has always been a healthy power/traditional metal scene as well. Greyhawk aim to add their stake with their first full-length Keepers of the Flame. Together since 2016, the quintet fuse together numerous neo-classical and traditional/power influences from domestic and European acts – creating a sound that comes from more of an 80’s/early 90’s platform. These tracks bring lots of throwback qualities that have been absent in a scene that has gotten more diverse and subdivided by the day.

The blazing shred skills of Jesse Berlin and Enrico Marriuzzo lead the charge – twin axe players who know their way around the fretboard, trading off licks and runs that rival the best of Randy Rhoads, Yngwie Malmsteen, and Paul Gilbert. Check out the back and forth action that ends up in tandem harmonies for the 3:06 instrumental “R.X.R.O.” – a piece that would leave Racer X and Chastain fans mesmerized. At other points during the vocal-driven songs such as “Don’t Wait for the Wizard” and “Drop the Hammer” you’ll get more power driven riffs and the chance to handle the soaring, bird-call notes and infectious melodies of Rev Taylor. He has a bit of Hansi Kürsch nature during his commanding lower and mid-range areas, but then can rise to the Rob Halford occasion when necessary. Overall the songwriting can shift from the more 80’s-oriented commercial affairs with solid, sing-along choruses and driving musical hooks such as the Ozzy-like “Halls of Insanity” or Thin Lizzy-esque “Masters of the Sky” against the virtuoso-driven numbers where all the musicians are going at peak performance points during “Frozen Star” or the aforementioned “R.X.R.O.”. Ending the record on an epic with Dio/Rainbow proportions for the title cut, the slower tempo and drawn out riffs allow Rev to use his dramatic phrasing to full effect.

The majestic cover has the right fantasy elements to be another talking point – Greyhawk surely would be in loads of conversations with teenagers had this album been released say in 1987. As it stands today, Keepers of the Flame is impressive although not exactly original in its total output and execution.