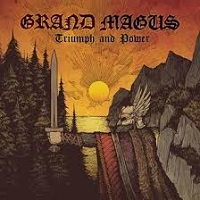 If that description didn’t scare you off, perhaps it is because you know that the Magus has delivered a few 10/10s in their day. Signs of that mastery abound here, but never quite materialize. Triumph and Power is a great listen, but is knocking on a door it should be kicking in.

There’s much done right though, like title track “Triumph and Power” – a nearly perfect concoction of ass-kicking composition culminating in one of the most infectious choruses on a record full of epic earworms. Close your eyes while listening (unless you’re like, driving or something) and risk being carried away to meet your destiny at the head of an invincible army, spilling blood across the land.

Mid-album brawlers “Holmgang” and “The Naked and the Dead” set the pace, leaping out with hard-rocking drums and chuggy thrash lines to set up some of the albums best solos. The blows keep falling all the way to the stirring final track “The Hammer Will Bite,” where rippling, muscled chords duke it out with mythical histrionics. Thor’s titular hammer crushes its foes with delicious certainty, and with a weight that is effortlessly evoked by the smirking refrain beneath an avalanche of punishing guitars.

One sore point is “Dominator” – a frustratingly good tune that falls just short of eternal glory despite snarling, meaty riffs and the band’s best vocal performance in years. What could have been the centerpiece of a masterful concept album instead languishes in distractingly juvenile lyrics and missed opportunity.

It would have been nice to see more of the dynamic range of instrumental “Ymer” worked into a song here and there, but Grand Magus successfully retain all their trademark swagger and power. While they too often opt for a more refined delivery here than the fire of their youth, Triumph and Power is still a darn good record, and you’d be doing yourself a disservice to ignore it.