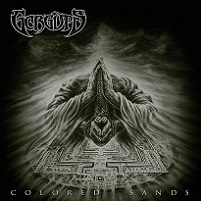 One had a hunch that with Atheist, Cynic, and Pestilence all enjoying the spoils of reformation, Gorguts wouldn’t be too far behind. Officially, the band has been back together since 2008, yet mainman Luc Lemay has never been one to not be meticulous; like, is there another way to approach a Gorguts album? The detail and fluctuations of 1998’s Obscura are already a thing of legend; probably the most death metal, but un-death metal album of recent memory. So, to re-create the past would be folly, yet Colored Sands isn’t a bad companion piece.

Joined by Dysrhtymia gents Colin Marston (bass) and Kevin Hufnagel (guitars), as well as Origin skin-basher John Longstreth, the technical pedigree that exists in Gorguts is second-to-none. Longstreth is the biggest surprise given his reputation as one of extreme metal’s most intense blasters, yet Lemay has made him play a more textured style, which only amplifies the moments of extremity. And like previous Gorguts releases (we’re looking right at you, Obscura), Colored Sands spares no attempt in letting those uniquely-shaped chord combinations do all the heavy lifting, thus bulking up jams like “Forgotten Arrows” and “Enemies of Compassion,” the latter of which is Voivodian to the nth degree.

The almost eight-minute track is going to require the most work and attention out of the nine songs presented. It’s almost a doom dirge, but with far more complex riffs and a spacious, distorted outlook. And like we were saying above – the chord choices here are simply too good and unique to not take notice. It’s not a rewrite of the death metal guitar playing handbook, but 12 years away has given Lemay and his new crew more than enough time to sharpen the edges with Colored Sands. A welcome return from one of the more valuable death metal bands to emerge from the 90s.