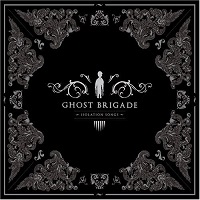 It’s the sort of thing some of us metal-journos live for: a band making a gargantuan leap from album to the next, developing, evolving…getting better. We’re so inundated with releases nowadays that it’s commonplace to totally overlook a band’s evolution, but Ghost Brigade’s jump from its debut to Isolation Songs hit us smack in the face, resulting in one of 2009’s most explosive albums.

Indeed the band’s first effort, 2007’s Guided By Fire had its share of promise, yet there was a little too much Neurosis/Isis shadowing going on, leaving little room for expansion and identity. With Isolation Songs, the Finnish five-piece have effortlessly melded the aforementioned Neuro-Isis leanings with modern-day Katatonia and Pasi-era Amorphis. And while such a mixture might sound a bit foreign to some, the scope of the 10 songs

here is so wide that it simply fails to tire.

The gigantic wall of guitars ushered in on Guided By Fire is in full force during opener “Suffocated” and “Lost in the Loop,” which boats a simple, yet crushingmain riff that rivals that of Mastodon’s classic “March of the Fire Ants” opening earth-mover. Melody and quiet, restrained moments make there way into both, which sets up far more melodically-steeped numbers like “Birth,” “My Heart Is A Tomb” and “Secrets of the Earth.”

Manne Ikonen proves to be a multi-dimensional character, volleying from standard growls to shimmering clean vocals that very much recall the prime work of ex-Amorphis singer Pasi Koskinen. “Into the Black Light” and more importantly, “Concealed Revulsions” is where it all comes together, with the type of booming, arena-ready chorus that serves as the highpoint of the album.