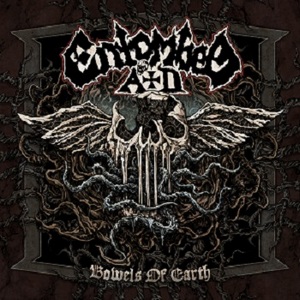 The question with Entombed releases for many years was “What type of Entombed will this album be?” Would it be death metal (probably not, as they’ve yet to truly return to those waters)? Would it be death ‘n’ roll? Or would it even more rock oriented? Well, since the split that created Entombed A.D. in the first place, it’s been pretty easy to calculate for fans. As their third release in this category, Entombed A.D. continue to walk the same path as the previous two – groovy and consistently catchy.

Continuing to merge that Wolverine Blues groove with Serpent Saints-era aggression, Bowels of Earth will seem familiar to any who have followed the band to date. Thick, crunchy grooves and some moments of punchy upticks in speed are what fuels each track, along with L.G. Petrov’s easily identifiable roars. Throttle-busters like “Worlds Apart” and “Torment Remains” are some great adrenaline-rushes, with energy oozes out from beginning to end, whereas the title track and “Bourbon Nightmare” give off that familiar balance of stomp-induced joy and groovy, mid-tempo swagger. The switch-offs are commonplace over the course of the album, which keeps things moving and grooving right along start to finish. There’s really no weak points in the formula, though those who aren’t a fan of the band’s formula aren’t going to be won over either.

Bowels of Earth isn’t a game-changing release so much as one that doles out exactly what the band is best at. If you enjoy the cited albums from Entombed, or have found favor with Entombed A.D.’s other albums, you will enjoy this quite a bit. The band is doing what they want to do with their music, and those seeking more of that big, crunchy groove with their daily dose of death metal should already know that this release is aimed directly at them.