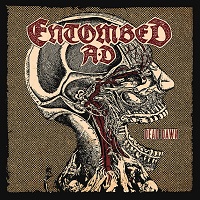 Isn’t Firespawn more Entombed than Entombed A.D.? The band’s Shadow Realms album from last year possessed more teeth and death metal servitude than Entombed A.D’s iffy first album Back to the Front, and even iffier Dead Dawn. Why don’t all parties consolidate matters and cut the confusion? But alas, there’s still something to be said for name-recognition, which Entombed A.D. is still carries, even if it’s just Mr. LG Petrov remaining as the last tie to the OG Entombed. He may need to do some deeper digging, though – Dead Dawn frankly, doesn’t cut it.

Part of Entombed’s original allure was their guitar tone, not to mention the labyrinthine song structures put together by drummer Nicke Andersson. And we can even toss the venerable Wolverine Blues into the mix. It is the first ever “death and roll” album, after all. Entombed A.D. appears to be stuck somewhere between none of the above, save for Petrov’s familiar gurgle. The band’s riffs can no longer carry a song – many of them here are pretty bland, like the opening “Midas in Reverse” or lazy “Down to Mars to Ride.” There’s little of that reckless, Stockholm swagger to these cuts, let alone the rest of the album’s jaunts, although “The Winner Has Lost” checks in with one of Petrov’s better lyrical performances in recent memory.

As spotty as Entombed’s career was, Entombed A.D.’s isn’t even at that level, which is troubling. The fact that it’s not quite “Entombed” may further stave off claims of the band tarnishing a good name, but there’s plenty of association here. As such, Dead Dawn sounds flat-out old and behind the times, which is a terrible thing to say. Entombed were always the ones out front not too long ago…