Entombed A.D. – Back to the Front (Century Media) 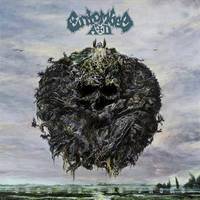 After all the delays and name controversies, the boys in Entombed (A.D.) finally get to release Back to the Front. Harkened as a return to the “older” days and intended to be released last year (before all of the name funny business), does the lengthy wait quench the Entombed thirst or leave fans wanting? That will probably be best answered by your own thoughts and expectations of the band returning to the ‘older days.’

If you are a fan that thoroughly enjoyed Wolverine Blues, you will most likely get a kick out of Back to the Front. The death ‘n roll vibe that permeated Wolverine Blues is out in force throughout this album. Previously revealed tracks “Bedlam Attack” and “Vulture and the Traitor” give ample evidence of what can be expected throughout the disc. Focusing on that classic sludgy guitar sound (just play the opening of “Bedlam Attack” and enjoy) and plentiful groove, there’s a touch of some d-beat and hardcore slants within the death metal structure. The rollicking riffs do not stop coming, from the crunchy opener “Kill to Live” to the fist-pumping finisher “Soldier of No Fortune;” this is the most fun this writer has had with Entombed with quite some time. Album standout honors go to “Pandemic Rage,” which easily boasts the strongest chorus with the ominous guitar riff and LG’s signature bark setting a powerful tone, not to mention the snazzy solo they snuck in.

Anyone crazy enough to think that the band would create another Left Hand Path or Clandestine is out of luck with Back to the Front (seriously, why would they do that when there’s about 5,000 other bands directly ripping those albums off at the moment – take your pick of ten and be forever happy). Entombed has managed to capture some of the ravenous death ‘n roll of their past and combine it with enough other touches that it makes them sound like a band ready to push forwards rather than linger in their past glories. Hopefully this will prove to be a fresh start for Entombed A.D. with more greatness to come.