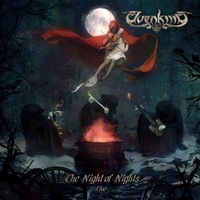 Chronicling a two decade plus history with their first double live album/DVD (at press time the audio version only made available to this reviewer), Elvenking has developed a certain cult appeal for their willingness to blend melodic power and folk metal vocally and musically. The Night of Nights captures a home grown Italian audience taking in 25 songs and almost 2 hours of happy, effervescent songs to bounce, swing, and promote jigs plus audience chants/sing-a-longs.

Elvenking’s appeal lies in the interaction between violin and guitars – separate and in unison they create these melodic passages that float in another realm, making thoughts of Skyclad and Kansas collide headlong into Sonata Arctica. “Through Wolf’s Eyes” and “The Loser” from 2012’s Era are two power burners sure to elicit the proper ‘heys’ and fist pumping action. During the conclusion of the concert we also get to hear the support of former members Jarpen (guitars) and Gorlan (bass) for “Pagan Purity”. Damna’s stage persona is one-part jester, one part professional- handling the crowd with ease even through the bilingual patter (mostly in Italian, partially in English for the international attendees).

A performance for the ages, The Night of Nights works well for the long-timers and could act as a perfect introduction to Elvenking newcomers. Live albums usually close one chapter of a career to begin another – however for this six-piece, they seem content to straddle the folk/power metal fusion nicely and shouldn’t struggle to keep the creative juices flowing.